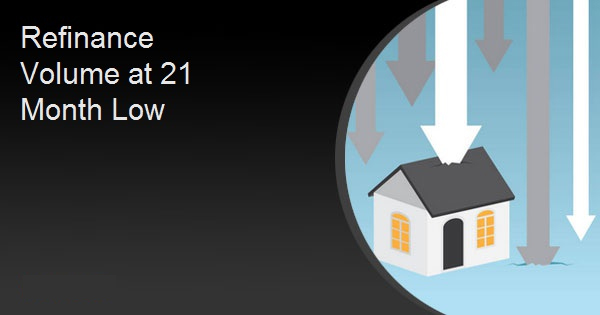 Applications for purchase mortgages recovered from a 5 percent drop the prior week to drive a small increase in overall volume during the week ended October 22. The Mortgage Bankers Association (MBA) said its Market Composite Index, a measure of mortgage application volume, increased 0.3 percent on a seasonally adjusted basis and was 0.2 percent higher unadjusted compared to the previous week.

The seasonally adjusted Purchase Index rose 4.0 percent from the previous week and was 3 percent higher before adjustment but remained down 9.0 percent year-over-year.

"Mortgage rates increased again last week, as the 30-year fixed rate reached 3.30 percent and the 15-year fixed rate rose to 2.59 percent - the highest for both in eight months," according to Joel Kan, MBA's Associate Vice President of Economic and Industry Forecasting. "The increase in rates triggered the fifth straight decrease in refinance activity to the slowest weekly pace since January 2020. Higher rates continue to reduce borrowers' incentive to refinance.

"Purchase applications picked up slightly, and the average loan size rose to its highest level in three weeks, as growth in the higher price segments continues to dominate purchase activity. Both new and existing-home sales last month were at their strongest sales pace since early 2021, but first-time home buyers are accounting for a declining share of activity. Home prices are still growing at a rapid clip, even if monthly growth rates are showing signs of moderation, and this is constraining sales in many markets, and particularly for first-timers."

The average contract interest rate for 30-year fixed-rate mortgages (FRM) with balances at or below the conforming limit of $548,250 increased to 3.30 percent from 3.23 percent. Points dipped to 0.34 from 0.35 and the effective rate increased to 3.40 percent.

The rate for jumbo 30-year FRM, loans with balances higher than the conforming limit, was 3.34 percent with 0.29 point. The previous week the rate was 3.26 percent with 0.33 point. The effective rate rose to 3.43 percent.

Thirty-year FRM backed by the FHA posted a 14-basis point increase in average rates to 3.31 percent while points grew to 0.38 from 0.32. The effective rate was 3.42 percent.

The 5/1 adjustable-rate mortgage (ARM) rate dropped to an average of 2.89 percent with 0.13 point. The previous week the rate was 3.09 percent with 30 points. The effective rate fell to 2.94 percent. The ARM share of activity decreased to 3.1 percent of applications from 3.3 percent.

MBA's Forbearance and Call Volume Survey for the week ended October 17 found 2.28 percent of servicer portfolios remain in forbearance, a 7-basis point reduction from the prior week. MBA estimates that 1.1 million homeowners are in active plans, 15.3 percent in their initial term, 74.8 percent in an extension, and 9.9 percent are program re-entries.

"Following two weeks of rapid declines, the share of loans in forbearance dropped again, but at a reduced rate. As reported in the past, many servicers process forbearance exits at the beginning of the month, therefore it is not surprising to see the pace of exits slow again mid-month," said Mike Fratantoni, MBA's Senior Vice President and Chief Economist. "The composition of loans in forbearance is evolving. More than 25 percent of loans in forbearance are now made up of new forbearance requests and re-entries, while many other homeowners who have reached the end of 18-month terms are successfully exiting into deferrals or modifications"