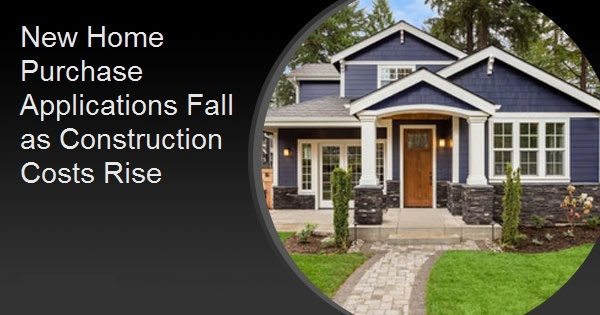 Based on the volume of applications and on assumptions regarding market coverage and other data, MBA estimates new single-family home sales were running at a seasonally adjusted annual rate of 843,000 units in September, a 3.5 percent decline from the August pace of 874,000 units. On an unadjusted basis, an estimated 66,000 newly constructed homes were sold during the month, down 7.0 percent from the estimate of 71,000 sales in August.

"New home sales purchase activity was weaker in September, and the average loan size rose to another record high, as homebuilders continue to grapple with rising building materials costs and labor shortages. The survey-high average loan size of $408,522 is evidence of higher sales prices from these higher costs, as well as the shift in new construction to larger, more expensive homes," said Joel Kan, MBA's Associate Vice President of Economic and Industry Forecasting. "The estimated pace of new home sales decreased 3.5 percent last month after a strong August reading, but the two-month sales pace is at its strongest since January 2021."

Conventional loans accounted for 75.1 percent of applications during the month. FHA and VA loans had shares of 13.9 percent and 10.5 percent, respectively and the Rural Home Service share was 0.5 percent. The average loan size for new home purchase grew from $406,922 in August to $408,522 in September.

MBA's Builder Application Survey tracks application volume from mortgage subsidiaries of home builders across the country. Utilizing this data, as well as data from other sources, MBA provides an early estimate of new home sales volumes at the national, state, and metro level. Official new home sales estimates are conducted monthly by the Census Bureau based on purchase contract signings which are typically coincident with the mortgage application. The Census Bureau's September New Home Sales report will be published on October 26.