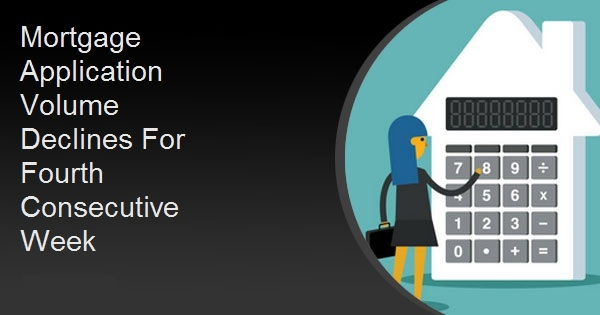 Mortgage application volume fell sharply last week, the second decline of more than 6 percent in the past three weeks. Refinancing was down for the fourth straight week and the volume of purchase applications fell as well. The Mortgage Bankers Association (MBA) said its Market Composite Index, which measures volume, was down 6.3 percent on a seasonally adjusted basis from one week earlier and 6.0 percent before adjustment.

The Purchase Index was 5 percent lower week-over-week on both an adjusted and an unadjusted basis. It was down 12 percent compared to the same week one year ago.

"Refinance applications declined for the fourth week as rates increased, bringing the refinance index to its lowest level since July 2021. The 30-year fixed rate has increased 20 basis points over the past month and reached 3.23 percent last week - the highest since April 2021. The 15-year fixed rate increased to 2.54 percent, which is the highest since July," said Joel Kan, MBA's Associate Vice President of Economic and Industry Forecasting. "Purchase activity declined and was 12 percent lower than a year ago, within the annual comparison range that it has been over the past six weeks. Insufficient housing supply and elevated home-price growth continue to limit options for would-be buyers."

The average contract interest rate for 30-year fixed-rate mortgages (FRM) with loan balances at or below the conforming limit of $548,250 increased to 3.23 percent from 3.18 percent, with points decreasing to 0.35 from 0.37. The effective rate increased to 3.33 percent.

Jumbo 30-year FRM, loans with balances that exceed the conforming limit had an average rate of 3.26 percent, up from 3.22 percent, with points increasing to 0.33 from 0.29. The effective rate was 3.35 percent.

The average contract interest rate for 15-year FRM rose 6 basis points to 2.54 percent and points were unchanged at 0.29. The effective rate increased to 2.61 percent.

The average contract interest rate for 5/1 adjusted rate mortgages (ARMs) increased to 3.09 percent from 3.08 percent, with points increasing to 0.30 from 0.26 and the effective rate rose to 3.20 percent. The ARM share of activity decreased to 3.3 percent of total applications from 3.04 percent a week earlier.

MBA's latest Forbearance and Call Volume Survey put the total number of loans in forbearance as of October 10 at 1.1 million. This represents a 34 basis point decline from the previous week to a 2.62 percent share of active mortgages. By stage, 14.8 percent of these loans are in the initial forbearance plan stage, 75.5 percent are in a forbearance extension and 9.7 percent are forbearance re-entries.

"Forbearance exits continued at an even more robust pace, resulting in a 34 basis-point decline in the overall forbearance rate. The decline was apparent across all servicer types and investor types," said Mike Fratantoni, MBA's Senior Vice President and Chief Economist. "There was a substantial drop of over 1 percentage point in the forbearance rate for portfolio and PLS loans, which includes loans held for investment purposes, loans serviced for private investors, and government loans that were bought out of Ginnie Mae pools for the purposes of modifying them and then re-securitizing them into Ginnie Mae pools."

MBA's latest Forbearance and Call Volume Survey covers the period from October 4 through October 10 and represents 73 percent of the first-mortgage servicing market of 36.7 million loans.