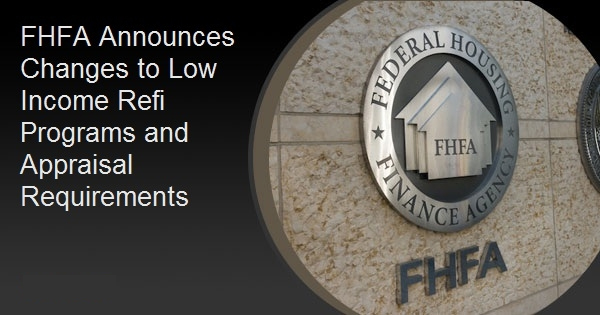 Both Fannie Mae and Freddie Mac (the GSEs) will be expanding their low-income refinance programs to include those making at or below 100 percent of an area's median income (AMI). The threshold on the programs is currently at 80 percent of AMI.

Sandra L. Thompson, acting director of the Federal Housing Finance Agency (FHFA) announced the change in her keynote address to the Mortgage Bankers Associations annual conference on Monday. Her agency, in monitoring the effects of the pandemic on different borrowers, found that, while many borrowers have taken advantage of the record low interest rates to refinance their mortgage, some population groups are at risk of being left behind. "We know through our long experience, including the Great Recession, that for those struggling with a mortgage, a meaningful payment reduction is the single greatest predictor of successful performance," she said.

FHFA found, however, that there was actually a drop in the share of refinancing by borrowers with incomes below 100 percent of AMI and these homeowners were losing out on a generational opportunity to lock in more sustainable monthly payments. "These are often the very people who could most benefit from adding breathing room to their budget," Thompson said.

FHFA is seeing significant numbers of lower income and minority GSE borrowers stuck in rates 30 to 60 percent higher than the current average, she said. "There are even a surprising number of borrowers who have been diligently paying the mortgages they received in the 2000s but are still having to pay rates of more than 6 percent."

To address this, the GSEs will be expanding their new low-AMI refinance programs, RefiNow (Fannie Mae) and RefiPossible (Freddie Mac), with several enhancements to grow the eligible population and to make these programs easier for lenders to offer. She said the refinancing programs had first been announced in the spring, but take-up has been slower among some of the larger depository lenders. The agency is incorporating feedback about how to make the programs more effective and how to reduce frictions in the process.

In addition to raising the AMI threshold which Thompson said should significantly increase the population of potentially eligible borrowers, FHFA has also "removed operational frictions in calculating the benefit to borrowers and financing closing costs." The 10-year seasoning cap will also be eliminated.

She added that there will still be work to do to ensure mortgage credit reaches everyone on an equitable basis. The economic recovery has been uneven, and not everyone is necessarily in a place to qualify for a refinance. But that alone doesn't explain the gaps in refinances to creditworthy GSE borrowers. Borrowers with smaller balances tend to get left behind when it comes to refinancing, she said, and she encouraged MBA's originators to connect GSE borrowers to affordable, sustainable refinance opportunities.

Thompson also touched on other possible changes, especially with appraisals. The "flexibilities" put in place for appraisers after COVID-19 hit and kept them out of homes have now expired, but FHFA has been reviewing the data gathered during their use as well as feedback from practitioners. She announced that both GSEs will incorporate desktop appraisals into their guides for many new purchase loans starting in early 2022.