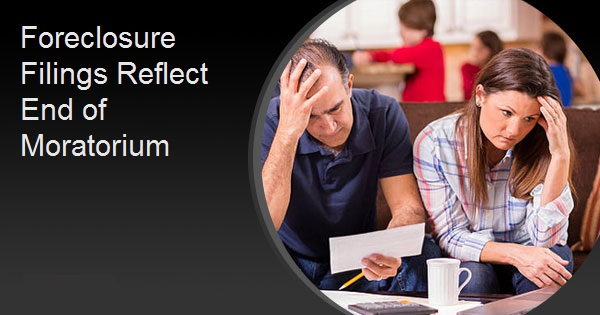 As was probably inevitable, foreclosure files rose significantly in the third quarter of 2021 and appeared to accelerate in the last month of that quarter. The moratorium on foreclosures which was put in place in March 2020 in response to the COVID-19 pandemic expired on July 31.

ATTOM, in its Q3 2021 U.S. Foreclosure Market Report says there were 45,517 foreclosure filings - default notices, scheduled auctions or bank repossessions - during the quarter, a 34 percent increase from Q2 and 68 percent more than in the third quarter of last year. Over 19,000 of those filings occurred in September, 24 percent more than in August and slightly more than double (102 percent) the volume in September 2020.

Filings to start the foreclosure process dominated activity at 25,209 during the quarter, up 32 percent from Q2 and 67 percent on an annual basis. It was the first quarter-over-quarter double digit increase since 2014. In September, the pace stepped up to 10,289 such filings, 23 percent more than in August and up 106 percent from September 2020. "So far the government and the mortgage industry have worked together to do an extraordinary job of preventing millions of unnecessary foreclosures using the foreclosure moratorium and mortgage forbearance program," Sharga added. "But there are hundreds of thousands of borrowers scheduled to exit forbearance in the next two months, and it's possible that we might see a higher percentage of those borrowers default on their loans."

A total of 7,574 properties were foreclosed in the third quarter, a 22 percent increase from Q2 and up 46 percent from a year earlier. Sources other than ATTOM have said that many of the bank repossessions that took place after the moratorium expired were on loans that had been seriously delinquent before it was invoked.