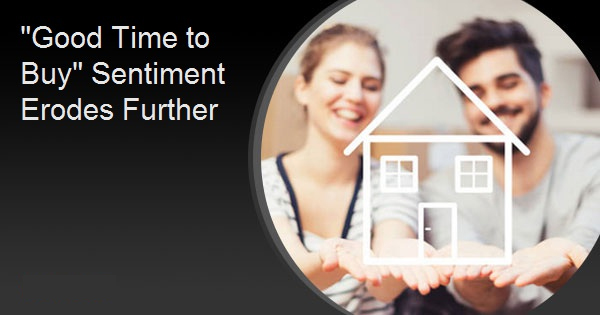 Consumers continue to have divergent opinions about the current environment for buying and selling a home. Fannie Mae says its September National Housing Survey (NHS) found a slightly higher number of respondents who think it is a good time to sell while opinions about buying have grown increasingly negative.

The company's Home Purchase Sentiment Index (HPSI), based on responses to six questions on the survey, declined 1.2 points from August to 74.5 in September. Three of the survey components were down from the previous month and the index is 6.5 points lower than in September 2020. Only 28 percent of respondents said it was a good time to buy a home while 66 percent said it was not, resulting net positive responses of -38 percent. This is down 7 points from the net in August and is 54 points lower year-over-year. Responses to the same question about selling have changed little over the last several months, yes responses rose 1 point to 74 percent and the net positive answers totaled 55 percent, 1 point higher than the previous month and 37 points higher than in September 2020.

The other component that increased reflected the number of consumers who expect mortgage rates to decline over the next 12 months. The total who think so is tiny, but it do go up from 6 percent to 8 percent, leaving a net negative of 43 percent.

The percentage of respondents who reported significantly higher incomes than a year earlier was unchanged from August at a net of 14 percent. This was 7 points higher than the prior September.

"The HPSI declined slightly this month but remains within the general bounds we've seen since the end of last year," said Doug Duncan, Fannie Mae Senior Vice President and Chief Economist. "The survey's story is also largely unchanged: Consumers feel it's a bad time to buy a home but a good time to sell - and they continue to cite high home prices as the primary reason. Across all consumer segments, renters and younger consumers were slightly more likely to indicate it's a bad time to buy, perhaps a reflection of their generally lower incomes and their observation that the availability of affordable homes is lacking. We're also seeing a softening in consumers' expectations that home prices will continue to increase; however, in our view, other housing market fundamentals remain supportive of further home price appreciation - including low levels of inventory and low interest rates."

In addition to the good/bad time to buy component, responses were also more negative regarding home prices and job loss. The percentage of consumers who expect home prices to continue upward fell 3 points to 37 percent while 24 percent expect prices to decline and 33 percent think they will flatten, leaving a net of 13 percent expecting further appreciation.

When respondents were asked if they were concerned about losing their jobs over the next six months, 81 percent said they were not, down 1 point from August. Those who were concerned increased from 15 to 16 percent. The net share of those not concerned dipped 2 points to 65 percent.