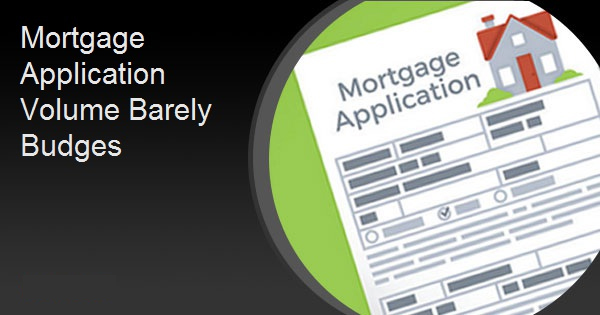 The volume of mortgage applications ticked up last week for the first time in three weeks, but an uptick was the extent of it. The Mortgage Bankers Association (MBA) said its Market Composite Index, a measure of that volume, increased 0.2 percent on a seasonally adjusted basis from one week earlier and was 0.4 percent higher on an unadjusted basis. Over the previous two weeks the index had lost an aggregate of 8.0 percent.

The Refinance Index decreased 1 percent from the prior week and was 16 percent lower than the same week one year ago. The refinance share of mortgage activity decreased to 63.9 percent of total applications from 64.5 percent.

The Purchase Index gained 2 percent week over week on both an adjusted and an unadjusted basis. It was down 10 percent compared to the same week in 2020.

Added Kan, "The 30-year fixed rate reached 3.18 percent last week and has risen 15 basis points over the past month, resulting in an 11 percent drop in refinance applications during this time. Government refinance applications fell over 3 percent last week, driven by a decline in FHA refinances and an 8-basis point increase in the average FHA mortgage rate. We continue to expect weakening refinance activity as rates move higher and borrowers see less of a rate incentive."

The rate for jumbo 30-year FRM, loans with balances greater than the conforming limit, was 2 basis points higher at an average of 3.22 percent. Points increased to 0.29 from 0.27 and the effective rate was 3.30 percent.

Thirty-year FRM backed by the FHA had a rate of 3.20 percent, an 8 basis point increase. Points were unchanged at.0.31 and the effective rate grew to 3.29 percent

The average contract interest rate for 5/1 adjustable rate mortgages (ARMs) jumped from 2.54 percent to 3.08 percent, with points increasing to 0.26 from 0.16. The effective rate was 3.17 percent. The ARM share of activity was unchanged at 3.4 percent.

"Many borrowers reached the expiration of their forbearance term as we entered October. The pace of exits climbed to the fastest pace in over a year, and the share of loans in forbearance declined at the fastest rate since last October, dropping by 27 basis points. The decline was the largest for Ginnie Mae and portfolio/PLS loans," said Mike Fratantoni, MBA's Senior Vice President and Chief Economist. "Payment performance has remained steady for those who have exited forbearance and into a workout since 2020, with more than 85 percent of those borrowers current as of October. It also continues to be striking that so many homeowners in forbearance have continued to make their payments. Almost 16 percent of borrowers in forbearance as of October 3rd were current."

Added Fratantoni, "Job growth was weaker than expected in September, reflecting the challenges from the Delta variant, ongoing supply-chain issues, and the resulting slowdowns in workplace and school re-openings. However, the drop in the unemployment rate, rising wages, and abundant job openings will continue to help support the housing market, including helping borrowers exit forbearance successfully in the weeks ahead."

MBA's latest Forbearance and Call Volume Survey covers the period from September 27 through October 3 and represents 73 percent of the first-mortgage servicing market of 36.5 million loans.