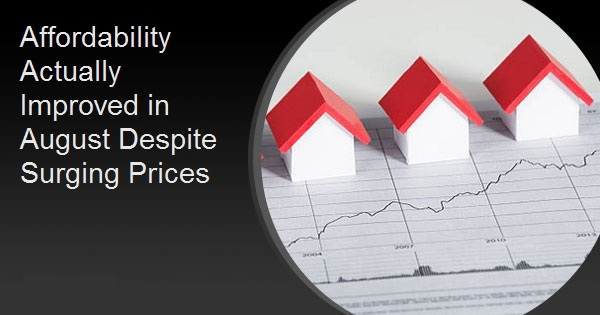 A new report from the National Association of Realtors (NAR) says housing affordability in the U.S. improved in August for the second straight month. NAR's Housing Affordability Index rose from 150.6 in July to 151.3 but was down from 165.8 the prior August.

The month-over-month increase was the result of a 1.1 percent dip in the monthly mortgage payment and a more modest decline of 0.7 percent in the median income. However, on an annual basis the monthly mortgage payment was up 13.9 percent while family income increased by 3.9 percent. The effective 30-year fixed mortgage rate was down 11 basis points from August 2020 to 2.89% and the median existing-home sales price rose 15.6 percent from one year ago.

The index exceeded 100 in all four major regions, meaning that a family with the median income had more than the income required to afford a median-priced home. The most affordable region was the Midwest, with an index value of 196.8 (median family income of $86,614 with the qualifying income of $44,016). The least affordable region remained the West, where the index was 114.9 (median family income of $94,372 and the qualifying income of $82,128).

Affordability rose by 0.4 percent or less in three regions compared to July and was unchanged in the West, but it declined everywhere on an annual basis. The Northeast had the biggest decline, 10.7 percent followed by the South which was down 7.1 percent. The West and Midwest dropped by 4.9 percent and 4.8 percent, respectively.

Compared to one year ago, the monthly mortgage payment nationally rose to $1,210 from $1,062 and increased as a percentage of income to 16.5 percent from 15.1 percent. The payment to income share was highest in the West at 21.8 percent and lowest in the Midwest at 12.7 percent.