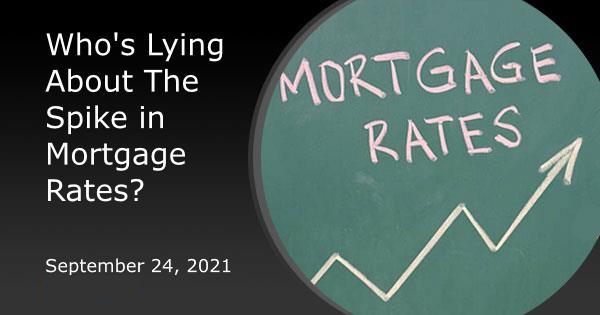 Who's Lying About The Spike in Mortgage Rates?

As recently as Thursday, news outlets were reporting mortgage rates had only risen modestly this week with 30yr fixed rates still well under 3.00%.  In fact, they were already well over 3.00% by then.

So who's lying to you?

Perhaps no one!  Thursday's news fell victim to the oldest trick in the mortgage rate reporting book.  Well, it's not a trick so much as a pitfall, but it's surprisingly common given how easy it would be to avoid.

The issue centers on Freddie Mac's weekly mortgage rate survey.  As the name suggests, this is an actual survey that's sent out to thousands of originators over the weekend.  Responses are accepted through Wednesday, but a majority of responses are in by Monday morning.  Results aren't released until Thursday.

This isn't a problem when rates remain relatively flat between Monday and Thursday, but it can cause significant confusion on more volatile weeks.  After all, this is by far and away the most commonly cited source among news organizations that are used to posting one piece on mortgage rates each week.

As you might have guessed, this was one of those more volatile weeks.  In fact, on Thursday, rates jumped at the fastest single-day pace since March.  Not a great day for a weekly mortgage rate survey to be released...  Rates ended up roughly a quarter of a point higher than Freddie's number, and that's a big move in the mortgage world.

Given the proximity to Wednesday's policy announcement from the Federal Reserve (aka "the Fed"), it's tempting to conclude the Fed said something to spook the market.  If that were truly the case, we likely would have seen a bigger reaction on Wednesday itself.

Instead, bonds went wild on the following morning, as seen in the 10yr yield below.  Mortgage rates only change once or twice a day, typically.  We can use 10yr Treasury yields to observe the moment-to-moment changes in the bond market as the 10yr tends to correlate very well with mortgage rates.

This begs the question: what happened on Thursday?

As unsatisfying as it may be, Thursday's drama transcended a single, massive source of inspiration.  The team effort didn't even have a clear leader, but players include:

Technical analysis is a form of market analysis that relies on charts, math, and key levels to inform trading strategy.  It exists in contrast to fundamental analysis which focuses on what's actually happening in the economy.

The most basic technical analysis is a line on a chart.  Lines can be horizontal to mark key levels where rates have tended to bounce in the past, or they can be drawn along a series of low/high points to track a trend.  Then when rates break outside one of the lines, traders will either buy or sell depending on their strategy and existing trading positions.

If this is starting to sound familiar, we talked about it quite a bit 2 weeks ago in the newsletter titled "Rate Reckoning Draws Closer" and again in last week's newsletter.  By then, rates were already starting to drift higher, but they hadn't yet broken the consolidation range we'd been tracking (NOTE: the following chart is from LAST week).

And here's how things look now:

Technicals aside, if we could only choose one impetus for the bond market, covid has ruled all since March 2020.  The short-term importance of covid numbers has varied, but traders have been waiting for late September for a variety of reasons (far enough into new school year, far enough away from Labor Day testing distortion, and right in line with an important update from the Federal reserve).

In fact, the Fed had previously called out late September for the same reasons.  The implication was that if rising case counts were subsiding by late September, the Fed would be that much more likely to curtail (or "taper") its rate-friendly bond buying programs.

If the chart above makes it seem like this week's rate spike was fairly benign in the bigger picture, that's because it is.  Sure, it's unpleasant, but we were clearly higher earlier this year.  Moreover, at any time before covid, current rates would have been all-time lows.

The risk for rates is that covid and econ data contribute to an ongoing trend toward higher levels.  It's still far too soon to throw around terms like "rising rate environment," (a term that implies months if not years of gradually higher rates) but we definitely just shifted gears into a rising rate trend.