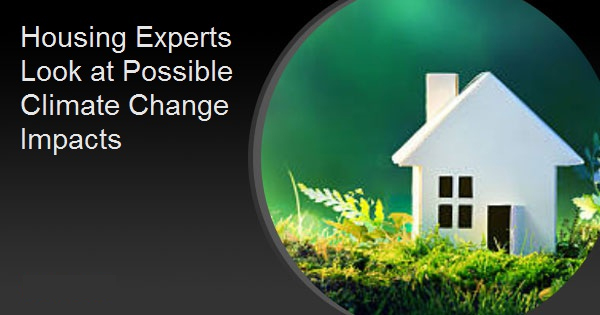 Two important members of the real estate community issued reports related to the impact of climate change within the last week. The Mortgage Bankers Association (MBA) Research Institute for Housing while CoreLogic's study was concerned with the housing costs associated with wildfires.

MBA's 49 page study, written by Sean Becketti, former chief economists for Freddie Mac, calls global warming "the source of climate change" and says its certainty is documented by 150 years of measurements. It is contributing to sea-level rise, more storm surges, and reductions in glaciers and snow coverage with recent studies also linking it to increased droughts and inland flooding events.

Selma Hepp, CoreLogic's Deputy Chief Economics, says wildfire season seems to be increasing in intensity year after year. Starting with the Dixie Fire, which started in mid-July and nearly two months and 840,000 acres later was only 52 percent contained. She goes through recent disasters, enumerating their costs in terms of rents and housing prices.

MBA says climate change will place increasing stress the way risk is distributed across housing finance stakeholders including consumers, landlords, home builders, lenders, servicers, insurance companies, government agencies and mortgage investors. What happens will depend on the actions taken - or avoided - by governments, businesses, and individuals. These actions will affect the future path of climate change and hence will either mitigate or exacerbate the impacts.

Becketti says one way to understand how climate change will impact the industry is to review the types of disclosures recommended for firms by the Financial Stability Board's Task Force on Climate-Related Financial Disclosures (TCFD). They divide disclosures into two categories, physical risks, and transition risks. Physical risks can be acute, such as floods and hurricanes that are projected to grow worse as a result of climate change, and chronic risks like temperature or sea level increases that may threaten buildings and infrastructure. Transition risk are the changes firms may be required to make to adapt to climate change including policy and legal, technology, market, and reputation risks.

The author calls coastal flooding the best example of how physical and transitional risks could impact housing. The National Flood Insurance Program (NFIP) has had many challenges over its history and increases in claims due to climate change are likely to stretch it to the breaking point provoking many difficult decisions. In addition, independent estimates of indicate that NFIP currently excludes 2/3 of at-risk properties which may mean the current government approach to disaster recovery may become unsustainable.

Even a better functioning NFIP may not be enough to sustain the system of risk allocation in housing and not all of the climate risks will fit neatly in the TCFD risk categories. Climate change may lead to property damage, but also increase mortgage default and prepayment risks, trigger adverse selection in the types of loans sold to Freddie Mac and Fannie Mae, increase the volatility of home prices, and produce significant climate migration.

While there are strategies to mitigate climate change and for adapting to what cannot be avoided, even the most optimistic forecasts tell us some additional global warming is virtually guaranteed along with additional flood, wind, and heat risks. Thus, adaptation strategies are needed to make housing and housing finance more resilient. These can include incorporating building modifications into new construction (easier) and existing buildings (more difficult and more expensive) and increasing the resiliency of communities through infrastructure improvements and standards. At present both mitigation and adaptation are expensive and require a high degree of adoption and cooperation that does not currently exist.

Regulators and investors are demanding more and more specific assessments of climate risk from companies and will likely require more quantified rather than qualified data in the future. European firms are ahead of American ones in this area but there are legislative and regulatory actions underway to improve reporting. Becketti says that while climate change is likely to increase mortgage default risk, current default models do not incorporate this.

Hepp writes that, while the Dixie fire is the largest in California's recorded history, it isn't the most destructive. The Tubbs Fire (Sonoma and Napa counties) in October 2017 destroyed 6 percent of the single family houses in Santa Rosa and the Camp Fire in November 2018 damaged or destroyed 18,800 structures. This included 20 percent of Butte County's single-family housing stock. CoreLogic puts the property losses from the Tubbs fire at $5 to $7 billion and the Camp Fire at $11 to $13 billion. Following both disasters, rent and home price growth accelerated in the fire-ravages areas as affected families rushed to find new shelter.

Since Camp and Tubbs, the intensity and frequency of fires has accelerated, and six of the top 20 most destructive California wildfires happened last year, burning a total of 4,257,863 acres and  destroying or damaging almost 10,500 structures. Many of the most destructive California fires have taken place in Butte, Plumas, or Yuba counties, sometimes affecting all three.

Hepp says the impact of fires varies according to local conditions and their duration and frequency. In many cases the displaced seek rental properties causing rapid increases in rents. Home prices are affected to, but that takes longer to play out. Unrelated and unanticipated boosts to demand, such as the pandemic, can confuse trends.

The North Complex Fire in August 2020 was the most destructive that year, and the fifth most destructive on record. It affected all three of the counties, burning twice the acreage but only one-eighth the structures of the Camp Fire in Butte County and its impact on the cost of housing was relatively muted.

Prior to the Camp Fire in 2018, rent growth in these areas was running close to statewide trends, but afterwards, rental growth rate accelerated above the state trend and continued to increase for another year, peaking at an annual growth rate of 25 percent compared to 2 percent statewide.

Rent growth had started to slow in Butte and nearby Yuba counties when the North Complex fire started. Because fewer structures were burned, the impact on the housing stock was much smaller. Yuba did see some acceleration in rent growth, but Hepp sees that as consistent with the statewide trend and with effects on demand related to the pandemic. Home price growth was similarly affected. Following the Camp Fire, prices in Butte County jumped 6 percentage points above the statewide trend. In Yuba County it trended above the statewide rate, and remained elevated with further acceleration at the onset of the pandemic as families searched for more outdoor space. In more mountainous Plumas County, with fewer housing opportunities than the other two, home prices fell following the Camp Fire and have remained below the statewide trend since then.

The North Complex fire had a similar effect on prices with growth accelerating in the months following the fire. Nevertheless, all three areas have seen slowing of home price acceleration, especially compared to the statewide trend. The Glass Fire struck Sonoma and Napa counties, also the location of the Tubbs fire, in September 2020. While the second most destructive of the year, the structural damage was only one quarter of that of the Tubbs fire. Following Tubbs, rent accelerated well beyond the statewide trend for about a year and then slowed significantly, particularly in Napa.

However, in May 2020, rent growth in Napa rose 15 percent year-over-year as Bay Areas residents sought refuge from the pandemic. The statewide increase was 5 percent. That surge slowed quickly but rebounded after the Glass fire and caught up with the statewide rate of rent growth by the beginning of 2021. Home price growth jumped more in Sonoma than in Napa after the Tubbs fire destroyed 6 percent of homes in Santa Rosa. After than, Sonoma's prices slowed and remained subdued compared to statewide growth. The Glass Fire mostly stayed away from populated Sonoma communities and had a bigger impact in Napa where home prices accelerated above statewide levels. Again, there was some effect from the pandemic related search for more indoor and outdoor space. Hepp concludes that the impact of wildfires on housing depends on the intensity and duration of the fires and when they cause a supply shock by destroying large portions of local housing the impact on rents is more immediate and larger.  The impact on home prices is more complex. It takes longer to manifest and tends to be smaller than the rental effects. But where an area is repeatedly hit, like in Butte, Plumas and Yuba counties, buyer demand may lessen. Increased property insurance premiums may also dampen price growth, particularly if affected areas are not close to jobs and urban amenities.