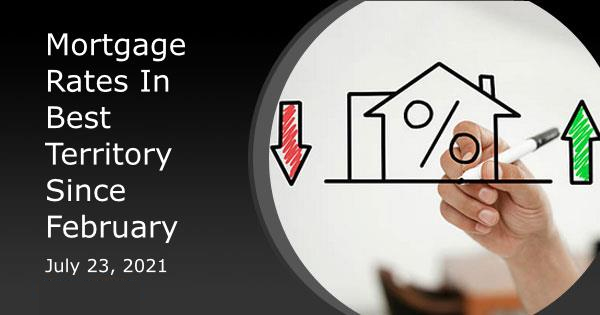 
This week's mortgage rates are hard to compare to last week's.  There are two simple reasons for this.

The 10yr Treasury yield is the perennial benchmark for mortgage rates.  Even though the correlation occasionally breaks down completely, it still does a great job of capturing momentum shifts for the overall bond market.

Recent momentum has been almost exclusively toward lower rates/yields.  In the short term, bonds benefited this week from their European counterparts as the European Central Bank maintained its rate-friendly stance.  Germany's 10yr yield is the closest thing we have to a hypothetical "EU 10yr yield."

Based on the chart above, US rates weren't solely relying on European influence.  Volatility in the stock market helps explain the divergence as traders moved away from risk early this week and back in the other direction as the week progressed.

Much of the risk aversion is predicated on fear and uncertainty surrounding rising covid case counts, especially as they concern the delta variant of the virus.  Investors conclude that, as long as that uncertainty persists, the Fed won't be in a position to start winding down its rate-friendly bond buying program, nor will the economy be firing on as many cylinders as it otherwise might.

These are the core reasons that noticeable shifts in case counts have produced a reliable reaction in rates/yields.  In the simplest terms: more covid = lower rates and less covid = higher rates, all other things being equal.

How have mortgage rates fared relative to Treasury yields?  Fairly well!  In fact, mortgages are much closer to all-time lows than Treasury yields.  Either way, you'd have to go back to February to see anything lower.

If the bond market paid attention to the European Central Bank this week, then next week is at least as important with the Federal Reserve releasing its latest policy statement on Wednesday afternoon.

The Fed is not yet in a position to make any substantive changes to current policy.  Nonetheless, investors will be paying careful attention to the verbiage of the announcement (as well as the press conference with Fed Chair Powell) for clues as to how and when policies may change in the future.