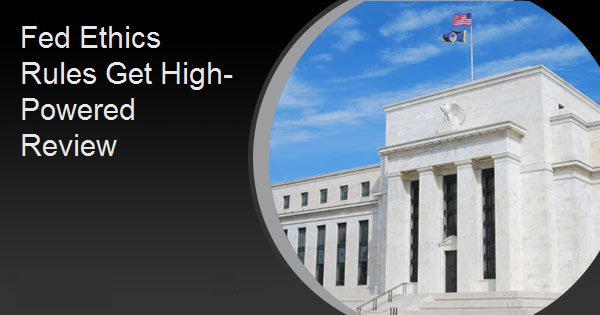 
Another powerful group of federal officials are in the hotseat after details of their personal finances were revealed. While there are no accusations of wrong-doing (unlike the case of several senators who faced ethics reviews in 2020), the financial disclosures of several Fed presidents have prompted a bank-wide smell test.

Powell's actions came to light after Senator Elizabeth Warren (D-MA) sent letters to each of the 12 regional bank presidents demanding stricter rules around stock buying. Three of the presidents had either made large stock trades last year or had substantial existing stakes in mutual and exchange-traded funds (EFTs). Singled out in the Franck article were:

Warren's September 15 letters called on each Fed president to institute a ban on the ownership and trading of individual stocks by senior officials at each regional office and demanded tighter restrictions on the types of financial activities that were permissible. Franck said ten of the letters were similar except for the two addressed to Kaplan and Rosengren.

The letter to Kaplan said in part, "As the Fed took extraordinary actions to address the risks to the economy and the banking and financial systems from the COVID-19 pandemic, you and your colleague Eric Rosengren made extensive trades in individual stocks and real estate investment trusts. has prompted concerns about conflicts of interest among high-level officials with far-reaching policymaking influence and extraordinary access to information about the economy."

Both Kaplan and Rosengren have agreed to sell their individual stock holdings.