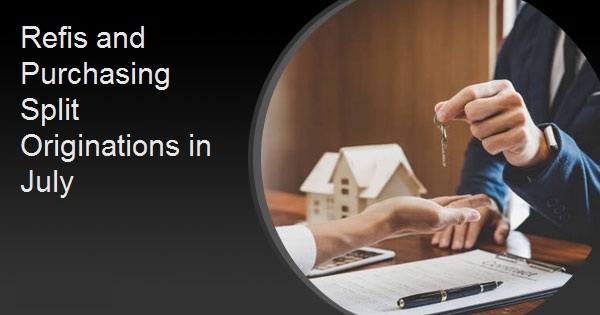 Refinancing and home purchases had a nearly even share of mortgage originations in July. ICE Mortgage Technology said that 50 percent of closed loans during the month were purchase mortgages while 49 percent were for refinancing. Refinancing, however, continued to dominate the conventional market at 54 percent of those loans. The share among FHA loans was 22 percent and refis accounted for 32 percent of VA loans.

The time to close a loan improved slightly from June to July. It took an average of 48 days on average, one day less than in June. The time to close a refinance dipped from 48 to 47 days and purchase loans took 48 days compared to 51 the previous month.

The average note rate during the month was 3.25 percent, 3 basis points higher than in June. Over the 12 months ended in July the note rate has ranged from 2.88 to 3.27 percent.

The closing rate for all loans in June was 77.2 percent, up nearly 2 points from June. Among refinance loans the rate increased from 58.6 percent to 63.2 percent and 76.6 percent of purchase loans closed compared to 75.1 percent the previous month. To compute the closing rate, ICE reviews a sample of loan applications initiated 90 days prior, in this case those from April 2021.

ICE's Origination Insight Report mines its application data from a large sample of approximately 80 percent of all mortgage applications initiated on its proprietary platform. The company says the report is a strong proxy of the underwriting standards employed by lenders across the country.