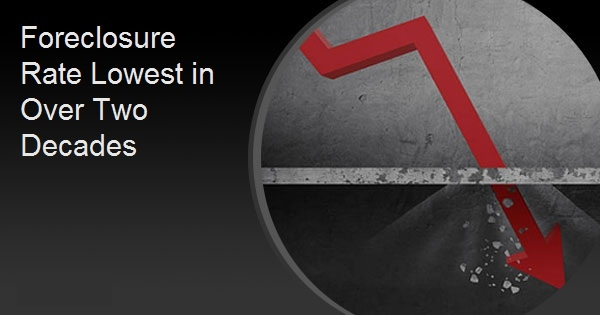 
Today there are 400,000 homeowners in their final month of forbearance and another 1.2 million still in the program as it winds down, thus, it is probably way too early to conclude that the nation has a ducked a pandemic foreclosure bullet, However, the CoreLogic report on June's loan performance suggests we might just pull it off.

The company says the U.S. foreclosure rate in June was the lowest in over two decades. Not a surprise as the national moratorium on bank repossessions was in force until the end of July. However, other metrics in the report indicate that homeowners may emerge from the pandemic financially damaged but with homeownership largely intact.

In June, 4.4 percent of all mortgages in the U.S. were in some stage of delinquency (30 days or more past due, including those in foreclosure). This was down 2.7-percentage points from the 7.1 percent rate in June 2020. Still, overall delinquencies remain above the February 2020, pre-pandemic rate of 3.6 percent.

"The downward trend in delinquencies, especially serious cases, is very encouraging - and a testimony to the impact of the significant economic rebound over the past six months, as well as government stimuli, record-low mortgage rates and loan modification options," said Frank Martell, president and CEO of CoreLogic. "Providing resources to homeowners experiencing distress to help educate them on available government and private-sector support will aide in shrinking delinquency and foreclosure rates even more over the remainder of this year."

Breaking down the national rate into buckets, CoreLogic says early-state delinquencies were down from 1.8 percent a year earlier to 1.1 percent. Using the February 2020 figures from earlier CoreLogic releases puts the current rate is 0.7 point lower than the pre-pandemic number.

Adverse delinquencies, loans 60 to 89 days past due, affected 0.3 percent of active mortgages, down from 1.8 percent in June 2020 and 0.6 percent that February.

Serious delinquencies, those 90 days or more past due, including loans in foreclosure, remain elevated from the February 2020 1.2 percent rate, but the 3.0 percent rate in June 2021 was down from 3.4 percent a year earlier. It was the 10th consecutive month of improvement for this measure.

The foreclosure inventory, the share of mortgages in some stage of foreclosure, is the lowest in CoreLogic records dating back to 1999. This is understandable as the moratorium discouraged lenders from even putting loans into foreclosure. The rate, 0.2 percent, is down from 0.3 percent in June 2020 and 0.4 percent the previous February.

CoreLogic also looks at the rate in which homeowners transition from current to 30 days past due. That rate in June was 0.6 percent, down from 1.0 percent and 0.9 percent during the year earlier and pre-pandemic periods, respectively. The report notes that in June, the federal foreclosure moratorium was extended again through the end of July to provide homeowners additional time to get financially back on track. The moratorium has helped move the foreclosure rate to a new generational low, the company says, but nearly half (43 percent) of respondents to a survey said they do not understand government mortgage relief programs. This could be contributing to higher overall delinquency rates.

Dr. Frank Nothaft, chief economist at CoreLogic says the nation may not yet be out of the woods. “While job and income growth has helped to push delinquency rates down, there are many families that remain in financial distress,” he said.  “More than one million borrowers had missed six or more payments as of June, triple the number of borrowers pre-pandemic. CoreLogic analysis found that as of June 2021, borrowers in forbearance and behind on mortgage payments had missed an average of 10 monthly payments.”

All U.S. states logged a decrease in annual overall delinquencies in June, with New Jersey (down 4.8 percentage points), New York (4.4 points) and Florida (4.1 points) leading with the largest declines. Every U.S. metro also posted an annual decrease, led by Miami, Laredo, Texas, and Kingston, New York. Rates for all fell by at least 5.6 percentage points.