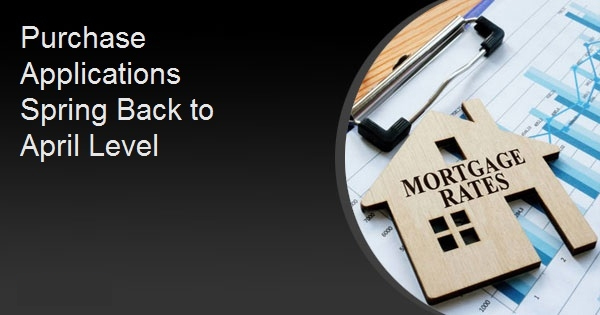 
The traditional end of summer was accompanied by a tiny boost in the volume of mortgage applications. The Mortgage Bankers Association said its seasonally adjusted Market Composite Index, a measure of mortgage loan application volume, increased 0.3 percent during the week ended September 10 on a seasonally adjusted basis from one week earlier. The index included an additional adjustment to account for the shortened week following the Labor Day weekend. The Index dropped 10 percent on an unadjusted basis.

The seasonally adjusted Purchase Index rose 9 percent although it was 5 percent lower than the previous week on an unadjusted basis and was 12 percent behind the same week one year ago.

The gain in purchase applications was offset by the third consecutive decline in the Refinance Index. It was down by 3 percent both from the prior week and from the same week in 2020. The refinance share of mortgage activity decreased to 64.9 percent of total applications from 66.8 percent the previous week.

"Purchase applications - after adjusting for the impact of Labor Day - increased over 7 percent last week to their highest level since April 2021. Compared to the same week last September, which was right in the middle of a significant upswing in home purchases, applications were down 11 percent - the smallest year-over-year decline in 14 weeks," said Joel Kan, MBA's Associate Vice President of Economic and Industry Forecasting. "Both conventional and government purchase applications increased, and the average loan size for a purchase application rose to $396,800. The very competitive purchase market continues to put upward pressure on sales prices."

Added Kan, "While the 30-year fixed rate was unchanged at just over 3 percent, it was not enough to drive more refinance activity. Refinance applications slipped to their slowest pace since early July, and the refinance share of applications fell to 65 percent, which was also the lowest since July."

Rates for fixed rate mortgage (FRM) products were either flat or down slightly from the previous week. The average contract interest rate for 30-year FRM with balances at or below the conforming limit of $548,250 was unchanged at 3.03 percent, Points dipped to 0.32 from 0.33 and the effective rate was unchanged at 3.12 percent.

Fifteen-year FRM rates averaged 2.34 percent, down from 2.37 percent the prior week while points increased to 0.29 from 0.26. The effective rate was lower at 2.41 percent

Adjustable rate mortgages (ARMs) continued the recent pattern of sizeable weekly swings, last week increasing to 2.68 percent from 2.56 percent. Points dropped to 0.11 from 0.17 and the effective rate increased to 2.72 percent. The ARM share of activity was 3.3 percent, up from 2.5 percent the previous week.

"The share of loans in forbearance decreased by 15 basis points last week, as forbearance exits jumped to their fastest pace since March. The fast pace of exits outweighed the slight increase in new forbearance requests and re-entries," said Mike Fratantoni, MBA's Senior Vice President and Chief Economist. "Servicer call volume jumped last week as summer came to an end and many borrowers reached the end of their forbearance terms. We anticipate a similarly fast pace of exits in the weeks ahead, which should lead to increased call volume and a further decline in the forbearance share."