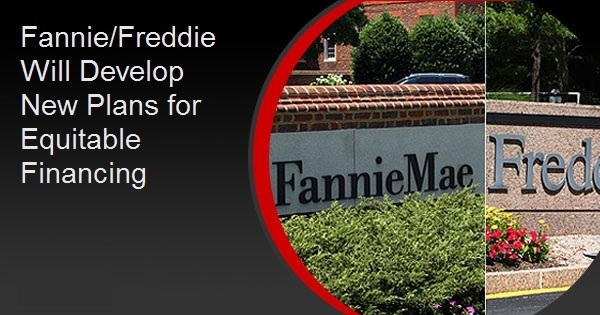 
The GSEs, Fannie Mae and Freddie Mac, will be required to submit Equitable Housing Finance Plans to their regulator the Federal Housing Finance Agency (FHFA) by the end of the year. The plans, which will be updated annually, will identify and address barriers to sustainable housing opportunities for the next three years. FHFA also will require the GSEs to submit annual progress reports on the actions undertaken during the prior year to implement their plans.

"For generations, discriminatory practices like redlining have prevented communities of color from building wealth through homeownership," said FHFA Acting Director Sandra L. Thompson. "By identifying the barriers to equitable and sustainable housing finance opportunities and setting goals for addressing those barriers, the , consistent with safety and ​soundness, can responsibly reduce the racial and ethnic disparities in homeownership and wealth that still exist today."

The initiative is a result of a recently signed Memorandum of Understanding between FHFA and the Department of Housing and Urban Development (HUD) regarding fair housing and fair lending coordination.

FHFA is issuing a Request for Input that seeks public comment to aid the GSEs in preparing their first plans and FHFA in overseeing them. The comment period will run until October 25.

Leadership of both Freddie Mac and the Mortgage Bankers Association (MBA) applauded the announcement. MBA President and CEO Bob Broeksmit, said, "MBA commends FHFA for engaging the GSEs in the development of comprehensive business plans to advance equity in housing. We have championed efforts to reduce the racial homeownership gap, and we will be releasing our policy recommendations in the coming weeks, including areas where the GSEs can play a critical role.

Freddie Mac's CEO Michael DeVito said, "This work builds upon the company's long track record of making home possible for homebuyers and renters across all markets and dimensions, including race, ethnicity, sexual orientation and ability. Together, we can identify and address barriers to sustainable housing, expand credit responsibly and bring greater equity to the American Dream."