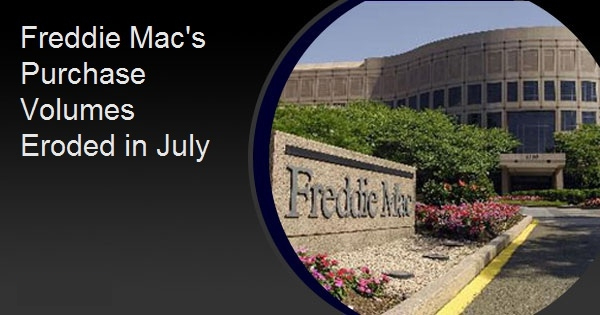 
Freddie Mac reported this week that its total mortgage portfolio increased at an annualized rate of 8.4 percent in July compared to a 12.9 percent gain in June.  The portfolio balance at the end of the period was $3.033 trillion compared to $3.021 trillion the prior month and $2.518 trillion a year earlier. Purchases and Issuances totaled $85.899 billion, and Sales were ($1.110) billion. The June numbers were $92.609 billion, and ($1.369) billion, respectively.

Single-family refinance loan purchase and guarantee volume was $40.5 billion in July compared to $50.9 billion in June, representing a 50 percent share of total single-family mortgage portfolio purchases and issuances, down from 59 percent the previous month.

The annualized growth of the Mortgage Related Investments portfolio was (29.3) percent compared to declines of (132.1) percent in June and (4.9) percent a year earlier.

The $110.470 billion ending balance of the Mortgage Related Investments Portfolio was composed of $49.293 billion in Agency Securities, Mortgage Loans valued at $59.880 billion, and Non-Agency Securities at $1.297 billion. Mortgage related securities and other guarantee commitments increased at an annualized rate of 11.4 percent in July compared to 16.7 percent in June.

Freddie Mac said the measure of its exposure to changes in portfolio value averaged $63 million in July compared to $17 million in June. Maximum exposure to Fannie Mae-issued collateral that was included in Freddie Mac-issued resecuritizations was approximately $100.4 billion.