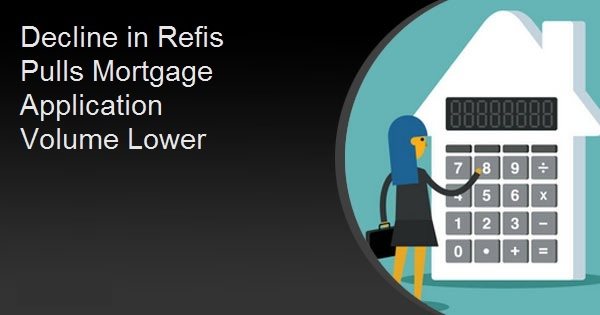 
Mortgage application volume declined again last week, dragged down by flagging refinance activity. The Mortgage Bankers Association (MBA) says its Market Composite Index, a measure of that volume, decreased 2.4 percent on a seasonally adjusted basis from one week earlier.  On an unadjusted basis, the Index was down by 3 percent.

The Refinance Index decreased 4 percent from the previous week and was 2 percent higher than the same week one year ago. The refinance share of mortgage activity decreased to 66.8 percent of total applications from 67.3 percent the previous week.

The seasonally adjusted Purchase Index gained 1 percent on the prior week but fell 2 percent on an unadjusted basis. It was 16 percent lower than the same week in 2020.

"There was little change in mortgage rates last week, with the 30-year fixed remaining at 3.03 percent. Despite low rates, refinance applications declined, with some borrowers still waiting for rates to drop even lower. Recent uncertainty around the economy and pandemic have kept rates low over the past month, which is why the refinance index has oscillated around these levels," said Joel Kan, MBA's Associate Vice President of Economic and Industry Forecasting.

"Even with a slight increase, purchase activity hit its highest level since early July, as applications for conventional and government loans increased. Home purchase activity continues to be dominated by higher price tiers of the market, with the purchase average loan size now at $396,500, the highest average in five weeks. According to FHFA, June's year-over-year increase in home prices was 18.8 percent, while the second quarter saw a 17.4 percent increase overall. Both measures set new records, as housing demand continued to outpace the inventory of homes for sale."

The average contract interest rate for 30-year fixed-rate mortgages (FRM) with conforming loan balances of $548,250 or less was unchanged at 3.03 percent while points increased to 0.34 from 0.29.  The effective rate edged up to 3.13 percent.

Jumbo 30-year FRM, loans with origination balances higher than the conforming limit, had an average rate of 3.13 percent with 0.26 point, both unchanged from the prior week. The effective rate remained at 3.21 percent.

Fifteen-year FRM saw a 1 basis point increase in its average contract rate to 2.39 percent. Points rose to 0.30 from 0.29 and the effective rate increased to 2.47 percent

The 5/1 adjustable rate mortgage (ARM) had an average rate of 2.80 percent, up from 2.68 percent the prior week. Points fell to 0.13 from 0.24. and the effective rate rose to 2.85 percent. Adjustable-rate mortgages garnered a 3.2 percent share of total applications, up from 3.1 percent the previous week.

MBA's latest Forbearance and Call Volume Survey puts the total number of loans in forbearance as of August 22 at 1.6 million or 3.25 percent of the nation's active mortgages. This is unchanged from the prior week. Of those loans, 10.2 percent are in the initial forbearance plan stage, while 81.7 percent are in a plan extension. The remaining 8.1 percent are forbearance re-entries.

The shares of Fannie Mae and Freddie Mac and Ginnie Mae (VA and FHA) loans in forbearance were also unchanged from the previous week at 1.66 percent and 3.92 percent, respectively. The share serviced for bank portfolios loans and private-label securities (PLS) increased 3 basis points to 7.18 percent. Loans serviced by independent mortgage bank (IMB) servicers rose by 2 basis points to 3.50 percent while those in depository servicer portfolios remained at 3.35 percent.

"The share of loans in forbearance changed little once again this week, as both new requests and exits remained at a slow pace," said Mike Fratantoni, MBA's Senior Vice President and Chief Economist. "We expect a sharp increase in forbearance exits over the next month as many borrowers reach the 18-month mark and see their forbearance plans end. For those borrowers who have exited in August, the majority either enter deferral plans or obtain modifications."