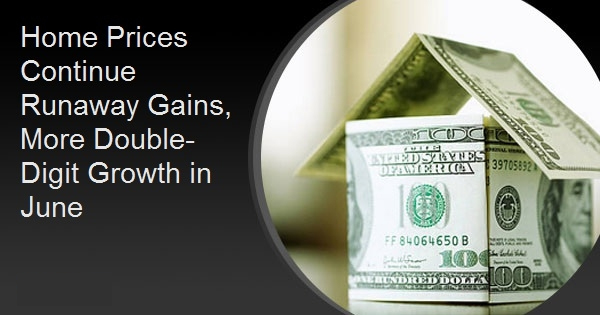 
Annual price gains remained at a double-digit pace in June. Both The S&P CoreLogic Case-Shiller indices and the Federal Housing Finance Agency's (FHFA's) House Price Index (HPI) showed further acceleration in the rate of increase. The growth rate in most of the Case-Shiller indices approached 2 percentage points in a month.

Case-Shiller's U.S. National Home Price NSA Index, which covers all nine U.S. census divisions, reported a 18.6 percent annual gain in June, compared to 16.8 percent appreciation in May. The 10-City Composite rose 18.5 percent, up from 16.6 percent the previous month and the 20-City Composite posted a 19.1 percent year-over-year gain, a 2 point gain from May's rate. It was the 13th straight month of price acceleration.

Phoenix, San Diego, and Seattle were again the top gainers among the 20 cities tracked in June. Phoenix led the way for the 25th month, this time with a 29.3 percent year-over-year increase, followed by San Diego and Seattle at 27.1 percent and 25.0 percent, respectively. All 20 cities reported higher price increases in the year ending June 2021 versus the year ending May 2021.

CoreLogic Deputy Chief Economist Selma Hepp commented, "While the housing market feels like it has legs that never get tired, inventory and affordability constraints are still expected to put a damper on price growth. Some early data suggests that the buyer frenzy experienced this spring is tapering, though many buyers still remain in the market. Nevertheless, less competition and more for-sale homes suggest we may be seeing the peak of home price acceleration. Going forward, home price growth may ease off but stay in the double digits through year-end."

"June 2021 is the third consecutive month in which the growth rate of housing prices set a record, according to Craig J. Lazzara, Managing Director and Global Head of Index Investment Strategy at S&P DJI. "The last several months have been extraordinary not only in the level of price gains, but in the consistency of gains across the country. In June, all 20 cities rose, and all 20 gained more in the 12 months ended in June than they had gained in the 12 months ended in May. Home prices in 19 of our 20 cities (all but Chicago) now stand at all-time highs, as do the National Composite and both the 10- and 20-City indices.

"June's 18.6 percent price gain for the National Composite is the highest reading in more than 30 years of S&P CoreLogic Case-Shiller data. This month, Boston joined Charlotte, Cleveland, Dallas, Denver, and Seattle in recording their all-time highest 12-month gains. Price gains in all 20 cities were in the top quartile of historical performance; in 19 cities, price gains were in top decile.

"We have previously suggested that the strength in the U.S. housing market is being driven in part by reaction to the COVID pandemic, as potential buyers move from urban apartments to suburban homes. June's data are consistent with this hypothesis. This demand surge may simply represent an acceleration of purchases that would have occurred anyway over the next several years. Alternatively, there may have been a secular change in locational preferences, leading to a permanent shift in the demand curve for housing. More time and data will be required to analyze this question. As has been the case for the last several months, prices were strongest in the Southwest (+22.7 percent) and West (+22.6 percent), but every region logged top-decile, double-digit gains."

The S&P CoreLogic Case-Shiller Home Price Indices are constructed to accurately track the price path of typical single-family home pairs for thousands of individual houses from the available universe of arms-length sales data. The National U.S. Home Price Index tracks the value of single-family housing within the Uni0ted States. The indices have a base value of 100 in January 2000; thus, for example, a current index value of 150 translates to a 50 percent appreciation rate since January 2000 for a typical home located within the subject market. "During the second quarter, house prices peaked in June with an 18.8 percent growth rate compared to a year ago," said Dr. Lynn Fisher, Deputy Director of FHFA's Division of Research and Statistics. "For the quarter, annual gains surpassed 20 percent in the Mountain, New England, and Pacific census divisions and in all of the top 20 metro areas."

​​FHFA says home prices have now risen for 40 consecutive quarters, or since September 2011. There was Q2 over Q2 appreciation in all 50 states and the District of Columbia. The greatest gains were in Idaho, 37.1 percent, Utah at 28.3 percent, and Arizona at 23.9 percent. Montana and Rhode Island rounded out the top five. The Mountain division had the largest four-quarter appreciation at 22.9 percent along with 6.8 percent growth during the second quarter. That division has led in annual growth for the last 15 quarters. Appreciation was weakest in the West North Central division at 14.9 percent.

FHFA's index is based on the purchase price of homes financed by either of the GSEs Fannie Mae and Freddie Mac. It was benchmarked at 100 in January 1991 and is now at 343.3.