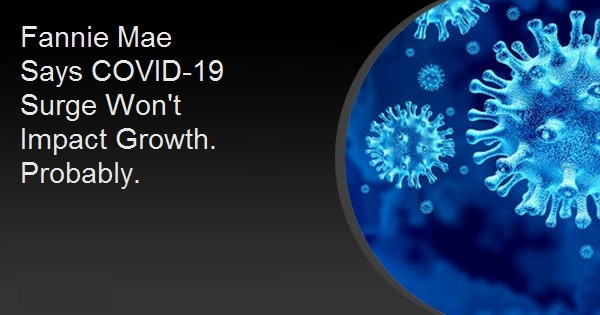 
Fannie Mae's economists provided a mixed forecast this month. The baseline view of the company's Economic and Strategic Research (ESR) group is for the recent virus surge to drag modestly on consumers' services consumption in the near term and modestly worsen supply chain disruptions abroad, but they don't think it will prevent solid growth in the current quarter. They do note early signs of modest behavioral changes on the part of consumers and companies. For example, a high frequency measure of restaurant reservations has recently pulled back slightly, and several airlines are reporting an uptick in customer flight cancellations. The most recent measure of the University of Michigan Consumer Confidence survey also declined dramatically, suggesting the COVID upswing is weighing on sentiment. Anecdotally, reports of employers delaying reentry to office work and cancelling in-person events and conferences are growing.

Home sales are still being held back by lack of inventory although existing home sales in June were stronger than expected, up 1.4 percent to 5.86 million annualized. Demand is likely softening as last year's pulling forward of home purchases wanes and rising prices weigh on affordability. Inventory, however, is the bigger constraint. New listings have picked up a bit, nearing 2019 levels, but this is still too low to sustain current sales which are about 10 percent higher than two years ago. The inventory of available homes in June was 2.6 months, the lowest ever for a June. Pending sales declined further in June so the ESR group expects the downward trend to resume, but to pick up near the end of the year. . While a large number of foreclosures are not expected, the report says the expiration of the foreclosure moratorium is likely to lead to some additional listings. So should an probable increase in new construction which should potentially induce more move-up buyers to list their existing homes although the supply is still expected to remain tight.

The recent decline in mortgage rates would, the economists say, typically lead them to expect more home sales over the second half of the year. However, the low inventory suggests that any rate-related increase in sales will be muted by that supply and the resulting upward pressure on prices. They have upgraded their forecast for existing home sales only modestly to 5.86 million this year from 5.83 million last month.

Home price increases continue at a double digit pace, up 18.0 percent on an annual basis in May, the fastest growth in the Federal Housing Finance Agency's Purchase-Only Home price Index which dates to 1992. As affordability declines, there should be some softening in appreciation.

New home sales were down 6.6 percent in June, to an annual rate of 676,000. This was the lowest pace since April 2020 and far weaker than the ESR group had expected. They attribute the decline to be primarily due to homebuilders turning down orders to catch up on construction backlogs. Many publicly traded builders had told stockholders they might do so in the face of supply disruptions, high materials costs, and labor shortages. Even with the softer June sales, the share of homes that sold before construction had started hit a record high. Sales will continue subdued in the near term until builders catch up. With lumber futures down about 70 percent from their April peak and supply side disruptions and labor scarcity expected to lessen, demand for new homes should continue. The question is whether builders will be able to meet it. Fannie Mae has downgraded its forecast for new home sales this year from 874,000 in the previous forecast to 801,00 but expects that sales will start moving up in the next few months. It also expects housing starts to improve despite a weaker than expected June report.

Multifamily construction continues strong and rent growth has also been robust in recent months. The company has upgraded its expectations for multifamily housing starts this year from 444,000 to 460,000.

Barring any surprises, the economists think interest rates will stabilize near current levels as markets await Fed Chair Jerome Powell's Jackson Hole speech at the end of the month for further signals. While they say there is still room for the labor market to recover, they expect the Federal Open Market Committee will formally announce the beginning of asset purchase tapering by the end of the year and project mortgages rates to end 2021 at 2.9 percent, down from 3.1 percent in last month's forecast.

Due to the lower expected rate environment, refinance origination volume has been raised by $143 billion to $2.5 trillion in 2021, and by $72 billion to $1.3 trillion in 2022. At the current interest rate level, they estimate that around 51 percent of all outstanding mortgage balances have at least a 50-basis point incentive to refinance.

For the economy as a whole, the ESR group has revised its 2021 forecast for real gross domestic product (GDP) from 7.0 percent down to 6.3 percent on a Q4/Q4 basis, with a partially offsetting upgrade to 2022's expected growth rate to 3.2 percent from 2.8 percent.  This is due to a weaker than expected second quarter figure and a modestly weaker outlook for the last half of the year. They say future growth is heavily dependent on a combination of businesses rebuilding depleted inventories and consumer spending continuing to shift away from goods and into services.

The inflation outlook was adjusted slightly, but the ESR group continues to expect inflationary pressures from wage and home price growth to partially offset those factors that have been driving inflation, many of which have likely peaked or will soon. They expect the Consumer Price Index (CPI) to remain around 5.0 percent at year-end. While substantial deceleration should follow, inflation is forecast to remain elevated through the end of 2022, with core CPI ending the year above 3 percent.