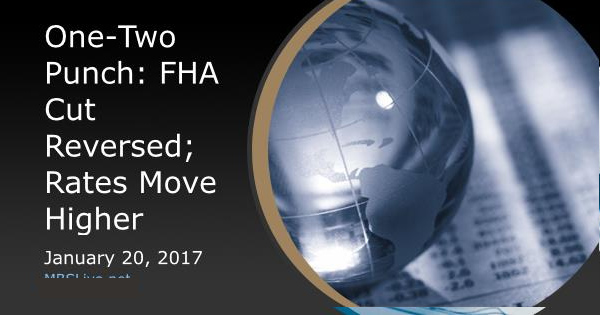 What a difference a week makes--especially for certain borrowers in the process of obtaining an FHA loan! Not only will they see the same rising rates that affected all loans this week, but they'll also give up the benefit from the recently-announced cut in FHA mortgage-insurance premiums (MIP).

Last week's newsletter discussed the FHA MIP cut in detail.  In short, it amounted to instant savings equivalent to an interest rate reduction of roughly 0.375% for most FHA borrowers.  The cut was to go in effect for loans closing on or after Jan 27th.

There was speculation that the incoming Secretary for Housing and Urban Development (HUD) might review and rescind the change, but nothing concrete.  Then, at the beginning of this week, rumors circulated that the Trump administration would be rolling back several of Obama's most recent executive orders and that the MIP cut would be included.

Scarcely an hour after the inauguration, HUD released an updated Mortgagee Letter (a weird term for their periodic guideline/policy updates) making it official.  The MIP cut is on hold indefinitely.  Even borrowers who were quoted the new, lower premium will be forced to pay the old rate.

All hope is not lost though.  The new letter states: "more analysis and research are deemed necessary to assess future adjustments while also considering potential market conditions in an ever-changing global economy that could impact our efforts."  Whether or not that means "don't hold your breath" remains to be seen.

On a final note, there's been chatter suggesting the cut was politically motivated.  On that topic, it's worth noting that the cut was executed in substantially similar fashion to the early 2015 cut.  Both were preceded by a favorable actuarial report in November, and both were announced around the same time in January.  There is no recent precedent for an MIP change being on the table days before the inauguration of a president that might seek to reverse it, so any claims of political motivation can't be confirmed or denied.

In addition to the MIP cut evaporating, mortgage rates rose quickly this week.  Freddie Mac's weekly rate survey (which unfortunately tends to be a "Tuesday over Tuesday" survey) suggests rates fell to 3-week lows.  But when we include the rest of the week (Wed and Thu were rough!), rates are actually at the highest levels of the year. 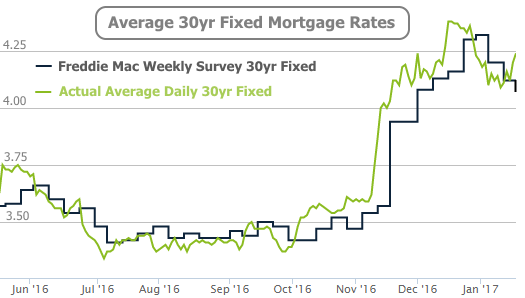 If you're interested in following the bigger picture trends in rates, take a look at the following chart of 10yr yields (the best benchmark for momentum in longer-term rates like mortgages).  Yields are thankfully still under the late-December ceiling, but they've broken above the 2.43% level which had been holding firm for several weeks.  2.52% is the next key level to watch.  It held firm through the end of the week.  A more dire scenario would be a break above 2.62%.  If that happens, 2013's precedent shows us the sort of "aftershock" that's possible. 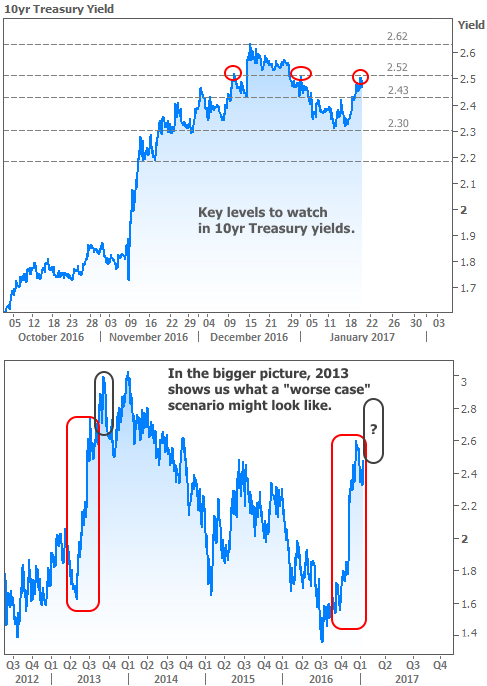 For all of the hurdles faced by housing and mortgage markets this week, a Fannie Mae report reminds us that housing will survive in 2017.  Those broader sentiments were echoed in several pieces of data this week.  For example, Builder Confidence--although lower--remains in great shape overall, and very close to recovery highs. 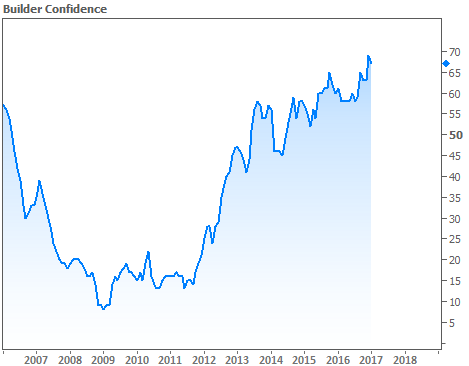 Housing Starts and Building Permits also put in a decent showing this week.  Although the trend in builders filing for permits remains constrained, the trend is positive when it comes to construction actually beginning (aka, a "housing start"). 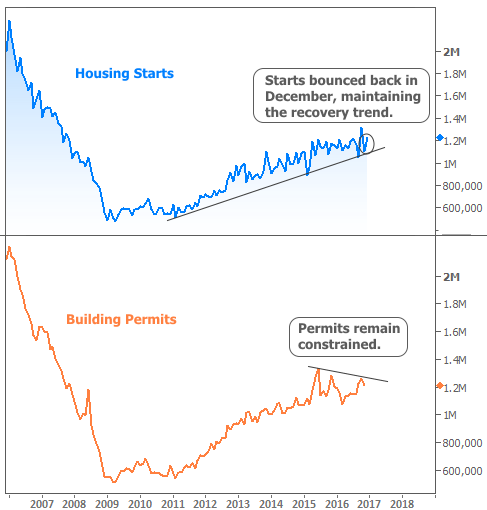