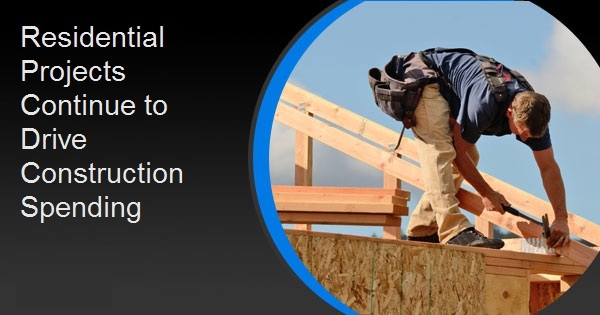 Construction spending fell off a bit in May, however residential construction remains the strongest sector, accounting for more than half the annualized private sector expenditures for the month. Total construction dollars spent during the month were at a seasonally adjusted annual rate of $1.545 trillion, down 0.3 percent from April but 7.5 percent higher than the prior May.

Privately funded residential spending was up 0.2 percent month-over-month, to a seasonally adjusted pace of $751.747 billion. This is 28.7 percent higher than in May 2020, but one needs to acknowledge the annual figures are against a period when construction was largely shut down due to the pandemic. On the other hand, the monthly increases are a little surprising given that lumber prices peaked near the middle of May and the National Association of Home Builders said many of its members were canceling contracts or putting projects on hold.

On an unadjusted basis, residential spending increased from $62.280 billion in April to $64.619 billion in May with single family expenditures moving from $32.618 billion to $34.021 billion. Multifamily spending was also flat on a non-adjusted basis at $8.376 billion.