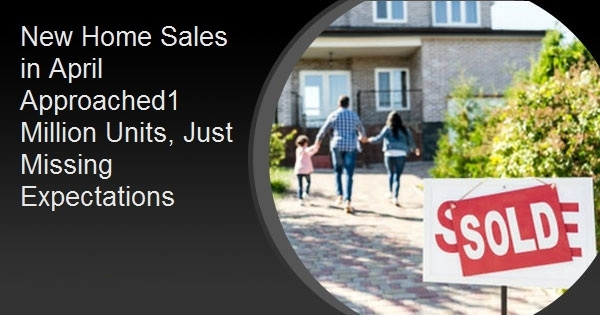 
Sales of newly constructed homes gave back some of their March gains last month, declining 5.9 percent to a seasonally adjusted annual rate of 863,000, according to the U.S. Census Bureau and the Department of Housing and Urban Development.  A surge in March had taken sales to a 1.021 million unit rate, a 20.7 percent gain, but those number also lost some luster. That estimate was downgraded to 917,000 units in Tuesday's report. April's rate of sales was 48.3 percent higher than the 582,000 unit estimate in April 2020, when the nation was largely shut down by the COVID-19 pandemic.

The rate of new home sales was much lower than predicted. Econoday analysts had forecast a rate between 915,000 and 1.04 million units. Their consensus was 955,000.

Sales in the Northeast declined by 13.7 percent from March on a seasonally adjusted annual basis but were double those in April 2020. The Midwest saw a decrease of 8.3 percent for the month but a 46.7 percent annual increase.

The South's new home sales were 8.2 percent lower than in March but up 61.2 percent year-over-year. The West had the month's only positive number, a 7.9 percent increase. Annual sales rose 11.6 percent.