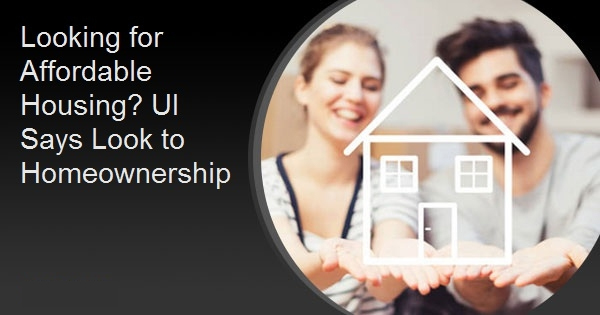 
A recent policy brief from the Urban Institute (UI) suggests a radical but common-sense solution for achieving affordable housing - homeownership. UI analyst Mike Loftin says there is no shortage of other policy proposals to address the housing problem - more federal investment in building public housing, subsidies to builders of affordable apartments, dramatic increases in rent vouchers - but owning one's own home, he says, is frequently more affordable than renting. There is a widespread idea that homeownership is for people who achieve some arbitrary level of financial success and not "appropriate" for people who are still on their path to financial security which may explain why government efforts toward affordable housing narrowly focus on the rental market.

Rental housing is important, but in the long term those strategies can be short sighted. More than $39 billion is paid to landlords every year to subsidize tenant rent, well over half the US Department of Housing and Urban Development's (HUD's) entire budget. A landlord is under no obligation to renew a tenant's lease and there is no guarantee changing administrations will continue to provide rent support while homeownership provides the kind of affordability and stability low income families need and the home gets more affordable over time.

The typical homeowner household spends 16 percent of its income on housing while the typical renter household spends 26 percent. Perhaps this is because people who own must make more money than those who rent. But, controlling for income, owning, on average, is still more affordable. For households making less than $50,000, renters spend 34 percent on housing versus 24 percent for owners. Where income is less than $20,000, it is 48 percent  and 38 percent, respectively.  This difference holds true by race or ethnicity. Black and Hispanic homeowners have higher housing expense ratios than white homeowners, but lower ratios than all renters, regardless of race or ethnicity. People who spend more than 30 percent of their income on housing are considered cost burdened. At 50 percent, that burden is considered severe. The lower your income, the more likely you are to be cost burdened. Where households are cost burdened or severely so, there is little money left to cover other necessities like food, transportation, clothing, and health care, leaving the household in a precarious financial situation and making it harder to achieve economic mobility.

Loftin says about 47.6 million households are "low income," with incomes below $50,000. They are divided about equally between homeowners and renters. Seventy-five percent of the renters are cost burdened, and 42 percent severely so. Only 49 percent of these homeowners spend more than 30 percent of their income on housing expenses, and only 26 percent spend more than 50 percent. That difference represents more than 6 million households and is a tremendous difference in how much money is available for other basic needs.

This trend continues down the income ladder. The share of severely burdened very low-income homeowners is 18 percentage points less than the percentage of renters. More than half of low-income homeowners are not cost burdened, compared with only 26 percent of low-income renters and 31 percent of them have a housing payment less than 1/5th of their income, a benefit only 7 percent of renters can claim. Again, this holds true down the income scale. Forty-nine percent of low-income and 68 percent of very low-income homeowners are also cost burdened, but those burdens tend to decline over time. This is rarely true for renters.

Another way to consider housing costs is by the sheer costs, per month and long term. If, in November 2020, a homeowner bought a home for $263,351, financed the entire amount with a 3.5 percent 30-year fixed-rate mortgage, paying closing costs out of pocket, all reasonable assumptions at the time, the buyers monthly principal, interest, taxes, and insurance (PITI) payments would be $1,464 (2019 American Housing Survey (AHS)). At that time, the Zillow Observed Rent Index puts the typical monthly rent at $1,734 a $270 per month difference. These are national estimates, but Loftin says it is more affordable to purchase than to rent in 40 states.   A homeowner is responsible for maintenance and repairs by AHS says this typically runs $167mo. Adding this to the example, the homeowner would still pay $93 less than the renter of comparable housing. (The real cost of renting is likely higher than Zillow's estimate. Renters tend to move more frequently so they bear additional costs like moving expenses, security deposits, and repairs that a landlord may refuse to cover.)

Renters are always vulnerable to cost increases; there is no such thing as a fixed rent 30-year lease. Rents increased 3.19 annually from 2010 to 2020 but rising home prices do not affect homeowners. For the homeowner with a fixed-rate mortgage, monthly payments increase only if property taxes, and insurance costs increase while a renter's entire payment is subject to inflation.

These different trajectories produce starkly different outcomes. Assume a low-income household has an annual income of $40,000 and spends $1,200/mo. on rent. They decide they will use that $1,200 to purchase a $205,000 home with the same monthly payment. Loftin says when comparing expense ratios, the benefits of owning are even more pronounced. Incomes, rents, and other expenses generally rise over time in some relationship to overall inflation. If a renter's wages and rent were to increase at the same rate, the share of one's income spent on housing stays the same, but they typically do not do so. Since 2010, the average annual nominal wage increase was 3.37 percent while rents rose an average of 3.19 percent and the overall inflation rate was 1.73 percent. If rents increase faster than wages, the renter's housing expense ratio increases, if wages outpace rent, the ratio decreases.  For a homeowner, wages that increase at the same pace of inflation drives down the ratio because only taxes, insurance and repair costs are subject to increases; P & I are held constant. Increases in housing costs will always grow faster for renters.

In the same example, with wages increasing slightly faster than rents, the renter's housing ratio declines, but it takes 17 years for a 1 point drop to 35 percent but only one year for the homeowner's ratio to fall that point and, by year 17, it is below 23 percent. When repair costs are included, the owner's ratio is slightly lower than the renter's by year 7 and reaches 27 percent in year 17.  By year 30, the renter's ratio is 34 percent and the homeowner's mortgage payment takes 16 percent, 19 percent if repair casts are included. Owning a home does not only become more affordable relative to income over time but also in absolute terms because the principal part of the mortgage payment is not an expense. It reduces the loan balance and builds homeowner equity, thus behaving like an automatic savings account. If the home does not depreciate, the homeowner retains the money and the portion going to equity increases every month.

This makes the principal portion what a homebuyer spends on housing an investment in real estate while rent is always an expense.  Ownership converts part of what would otherwise be 100 percent consumer spending into a combination of spending and investment. It is not a decision between investing in real estate versus investing in stocks, as financial advisers often claim but converts some portion of an existing expense (renting) into a real estate investment. This investment value is not dependent on appreciation. Even without it, the automatic savings function remains a big advantage. Assuming no price gains, the buyer of a $205,000 home will have accumulated $21,121 in equity by year 5. That next egg more than doubles by year 10, doubles again by year 20, and reaches $205,000 in year 30; money that would be lost when renting.

But homes have appreciation an average of 3.9 percent over the last 30 years. With only 3.0 percent annual gains, that same homeowner would have $483,000 in total home wealth. Loftin says this helps explain why homeowners have more than 40 times the wealth renters have. And while Black and Hispanic homeowners have less wealth than white homeowners, Black owners have nearly 14 times the wealth of white renters and Hispanic owners have nearly 20 times, making clear the power of ownership to help shrink the racial wealth gap.

Finally, there is what the author calls the  "affordability Big Bang." After the last mortgage payment, the next month's housing expense plummets; there is no longer a principal or interest portion, only taxes, insurance, and any repair costs. In our hypothetical, in year 31 the total housing payment drops to $470-or $749 including estimated repair costs-5 percent or 8 percent of household income. Meanwhile the renter's payment has increased to more than $3,000, a 34 percent housing burden. The Big Bang, of course, most significantly benefits homeowners who remain in the home for the life of the mortgage, but those who sell or refinance during the loan term also benefit. If the homeowner who sold the $205,000 property after 10 years, she would have accumulated $46,275 in equity absent any appreciation, about $30,000 after closing costs. At 3.0 percent appreciation her net would be $87,000

There is often good timing accompanying the Big Bang as it often occurs as the homeowner is nearing retirement. Not only will housing costs be lower when income declines, but the owner may have time to sock away retirement funds.

Loftin isn't advocating that everyone should be a homeowner and that there is no need for rental housing or a subsidized version. We need a healthy spectrum of housing to serve the needs of all Americans. He says we do need to stop assuming that any renter below a certain income is ineligible for ownership, and that millions of low- and moderate-income workers are not "ready" for homeownership. We must stop seeing housing as a reward for financial success and see it instead as a critical tool that can facilitate that success.