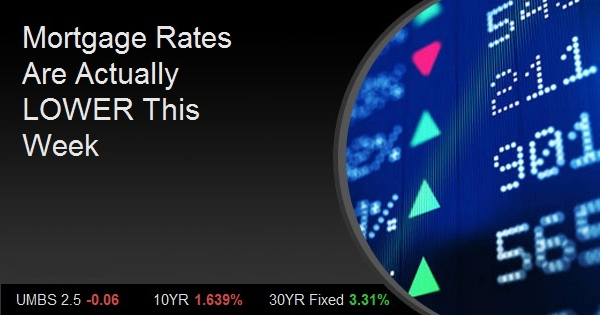 It's no secret that 2021 has been a rough year for mortgage rates so far.  They've moved higher on all but a few weeks, and exclusively higher if we only count the past 8 weeks (something that hasn't happened in more than a decade, even though there are a few instances of bigger moves overall).  In fact, it was that record-tying streak of "bad weeks" that served as the foundation for hope heading into the current week (as discussed here on Monday).  In other words, rates have had such a bad run that they were increasingly due to catch a break.  Granted, we still have another day to get through, but as of today, this week is very much on track to break the cycle.

Yes, rates are LOWER--not just today, but versus the end of last week as well.  That's an assertion that runs counter to most media coverage of mortgage rates today.  Why the discrepancy?  Because most media coverage is wrong, just like it was wrong last Thursday.  It's not that the stories in question are failing to report the facts.  They're simply relying on mortgage rate data that runs the risk of being extremely stale (if not outright misleading) during times of elevated volatility.  Here's how it panned out last week.

The shoe is on the other foot today.  Just as Freddie Mac's mortgage rate survey is getting caught up to last week's rate spike, the current week is taking things back in the other direction.  Bottom line, rates are NOT up 0.8% this week.  They're actually down by roughly an eighth of a percent for the average lender, thus falling back in line with levels seen on March 12th.