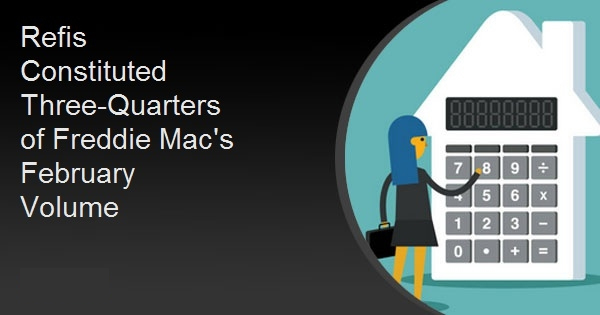 Freddie Mac reported this week that its total mortgage portfolio increased at an annualized rate of 17.7 percent in February compared to a 16.1 percent gain in January. The portfolio balance at the end of the period was $2.818 trillion compared to $2.777 trillion the prior month and $2.350 trillion a year earlier.

Single-family refinance loan purchase and guarantee volume was $85.0 billion in February compared to $84.56 billion in January, representing a 77 percent share of total single-family mortgage portfolio purchases and issuances, up from 73 percent the previous month.

The Mortgage Related Investments portfolio declined to 51.2 percent compared to a decrease of 64.6 a month earlier. The annualized growth in February 2020 was negligible at 0.1  percent.

The ending balance of the Mortgage Related Investments Portfolio was composed of $58.441 billion in Mortgage Related Securities, Mortgage Loans valued at $101.561 billion, Non-Agency, non-Freddie Mac Mortgage-Related Securities at $1.389 billion; and Agency non-Freddie Mac Mortgage related securities of $3.621 billion. Mortgage related securities and other guarantee commitments increased at an annualized rate of 21.3 percent in February compared to 17.8 percent in January.