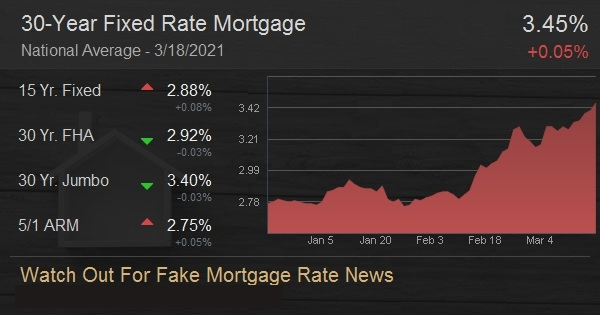 Despite your thoughts on the term "fake news," we have to talk about it in the context of mortgage rates.  It's highly pertinent, even if deception is far from the intention.  Thursday is a big day for mortgage rate news because that's when Freddie Mac's weekly mortgage rate survey is published.  Why does that matter?  Because, while any given lender can do a fine job of tracking their own rates over time, Freddie is one of the only games in town when it comes to capturing a broad average rate offering among multiple lenders.  It doesn't hurt that their numbers go back to the 70's and that they're one of the two gigantic housing agencies that see a vast majority of all mortgages in the US move across their desks in some capacity.

Over time, reporters have found it easy to simply cover mortgage rates once a week when Freddie's report comes out rather than gopher multiple rate quotes from multiple lenders every day.  That model has worked well for just about everyone just about every week, but there are times where it breaks down woefully.  This is one of those times.

At issue is the inherent LAG in Freddie's methodology.  Surveys are sent out Monday and are accepted through Wednesday.  But most of those who are going to respond end up doing so right when they get the survey.  As such, the rate index that is published on a Thursday is mostly just a Monday vs Monday rate report.  As such, it can be wildly inaccurate when the rest of the week is volatile.  In our experience (which involves gophering actual rates from multiple lenders multiple times per day), the changes in Freddie's survey rates also tend to lag in terms of magnitude as well.

3.40% is an average that includes purchases and refis.  That accounts for part of the difference since purchases have lower rates currently.  Even so, purchase rates are easily averaging 3.25% today.  Many lenders are already up to 3.375%.  Lower credit scores, lower down payments, investment properties, and other adjustments only make things worse.

Well, in a nutshell, covid is on the run.  There's a lot that goes hand and hand with that, but if you could only cite one development as driving rates to extremely low levels in 2020 and then higher at an extremely fast pace in 2021, it's the shift of momentum in the pandemic.  We discuss those other factors frequently enough that we'll save a more detailed breakdown for tomorrow and leave today's focus on discrepancies between rate reality and some of the news you might encounter.