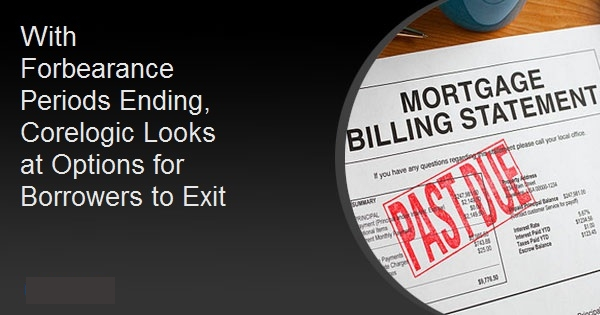 With Forbearance Periods Ending, Corelogic Looks at Options for Borrowers to Exit

At the end of the reporting period there were 2.59 million loans in active plans, 4.9 percent of the mortgages in servicer portfolios. Black Knight said it was the first time since April 2020 that there were fewer than 2.6mm forborne loans.

A 13,000 loan decrease in Fannie Mae and Freddie Mac loans and 8,000 in FHA and VA portfolios were offset by a 5,000 loan increase in loans serviced for bank portfolios and private label security investors.

The company says that the remaining 620,000 loans that are due to expire at months end will be "very telling" about what to expect in coming months in terms of extension and removal activity. The maximum length of forbearance terms was recently extended from 12 to 18 months.

Borrowers who exit forbearance usually do so with at least some accrual of past due principal, interest and perhaps taxes and insurance premiums that were advanced by their servicers during that period. The lenders have set out several options for repaying those amounts, one of which is a loan modification. CoreLogic has produced a primer about that alternative from two company executives, Sapan Bafna, Senior Leader, Advanced Delivery Engines, and Jay Okulanis, Senior Professional, Client Delivery.

They explain that a modification is a permanent restructuring of the loan to produce a more affordable payment. If the borrower can't afford their pre-forbearance mortgage payment but could make a modified payment this option might help them avoid foreclosure.

Servicers have the option of modifying a loan using one or more of the following components, reducing the interest rate, extending the loan's term, forbearing some portion of the principal balance which would then be payable in full, with or without interest, when the loan is paid off, the house refinanced or sold. Forgiveness of a portion of principal is not permitted under most lender guidelines.

A modification is beneficial to borrowers because it allows them to stay in the home and to the lender and servicer as it is very costly to foreclose on a property. Once in modification, credit or finances are not affected in a negative way.

The authors say a refinance is usually a better option than a modification for reducing monthly payments and the borrower should try that option first. But when a borrower is already delinquent refinancing may not be possible.

To obtain a modification a borrower should contact his/her servicer and indicate they are having trouble making their mortgage payment. (In the current forbearance program, servicers are proactively reaching out to borrowers as their plan term nears expiration.) The borrower completes a hardship affidavit and provides documentation of income and assets. Documentation as well as modification guidelines vary by lender, but typically includes income and expense information, bank statements, expenses, and proof of hardship.

An underwriter reviews the documentation and checks lender eligibility rules. Once eligibility is determined, the borrower is offered a waterfall of loss mitigation programs. The term 'waterfall' means that the servicer navigates through the lender's hierarchy of programs to determine the option that will work for the borrower. The borrower then must complete a three to four month trial period to demonstrate they can perform under the modification. If the trial is completed successfully, a permanent loan modification is signed and recorded. There is typically no cost for the modification, however delinquent interest and fees can be added to the balance.