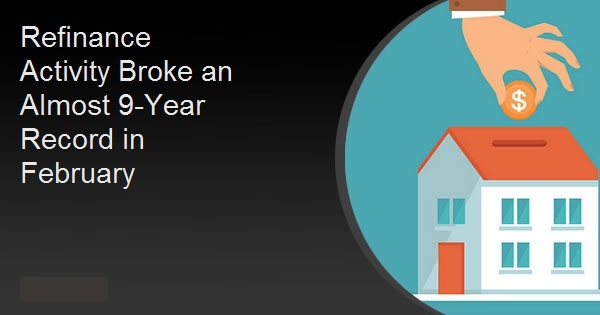 It hasn't exactly been a scramble, but homeowners have stepped up their refinancing activity over the last two months as they saw interest rates begin a slow but steady march higher.  The February Origination Insights Report from ICE Mortgage Technology shows the refinancing share of all loans originated during the month moved 1 point higher to 68 percent. This is an 8 point increase from December's 60 percent share. The conventional loan share of refinancing is up 7 points over the last two months. ICE says that a 68 percent refinancing share is a figure not seen since December 2012.

The 30-year rate for all closed loans and conventional loans rose 1 basis point each to 2.89 percent and 2.92 percent, respectively compared to the prior month. Thirty-year rates for FHA loans held steady at 2.86 percent and VA loans were unchanged at 2.60 percent.

"Homeowners continue to take steps to refinance while rates remain low," said Joe Tyrrell, president of ICE Mortgage Technology. "In February, that resulted in borrowers taking advantage of refinancing more than they have in nearly a decade."

The closing timelines did shorten significantly, down for all loans from 58 days in January to 53 in February. Processing time for refinances took an average of 52 days, down from 59 the previous month, and purchase times dropped 4 days to 53. Similar efficiencies were seen across conventional, FHA, and VA originations.

The Origination Insight Report is derived from a sampling of approximately 80 percent of all mortgage applications that were initiated on the ICE lending platform. The company says its report is a strong proxy of the underwriting standards employed by lenders across the country.