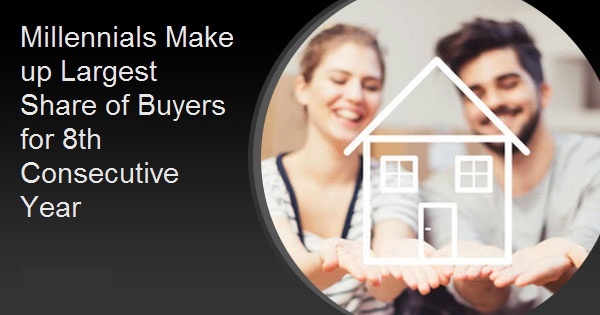 Whether or not it was another biproduct of the pandemic, The National Association of Realtors® (NAR) said the popularity of multigenerational homes increased last year. Homes that will house adult siblings, adult children, parents, or grandparents were purchased by 18 percent of homebuyers between the ages of 41 to 65. Those aged 75 to 95 were the second most likely to purchase a multigenerational home. This is among the key findings of NAR's annual Home Buyer and Seller Generational Trends Report derived from a survey of persons who had purchased a home over the prior 12 months.

"There are a variety of reasons why large families and extended families are opting to live together, one of which is that it's a great way to save money," said Jessica Lautz, NAR's vice president of demographics and behavioral insights. "Also, in light of the pandemic, many grandparents and older relatives found that being under a single roof - quarantining with family rather than away - worked out better for them."

Millennials made up the largest share of homebuyers this past year at 37 percent. They have dominated purchasing in every NAR report since 2014. Eighty-two percent of younger Millennials, those between the ages of 22 to 30, and 48 percent of older members of this cohort were first-time homebuyers, also the largest shares of all age groups. The younger Millennials tended to have been living with parents, relatives, or friends before they bought. NAR said this tends to allow flexibility toward saving a downpayment and finding a home.

The low inventory levels over the last few years, and the record lows reached this year, made it difficult for a lot of homebuyers to find adequate housing options. Nearly six in 10 homebuyers between the ages of 22 to 40 said just finding the right property was the most challenging step in the buying process. More than half of all homebuyers (53 percent) said it was the most difficult.

"Single women remain a large buying force," said Lautz. "A number of divorced women and those who were recently widowed purchased a home without the help of a spouse or roommate."

As is always the case in real estate, location proved to be an important component among buyers. Fifty-four percent of homes purchased by older Millennials, those aged 31 to 40 were in a suburb or subdivision. Out of this age group, 69 percent said the quality of the neighborhood influenced their neighborhood selection, a sentiment shared by 65 percent of younger Millennials. However, an even stronger factor among the younger group was "convenience to workplace." Seventy-four percent cited proximity to their employment as an imperative.

"The younger millennials overwhelmingly answered that they prefer to live closer to work, as many don't want a long commute and this was evident in their buying habits," said Lautz. "Additionally, both of these groups also placed a high value on being close to family and friends as 57 percent said that dynamic factored into what neighborhood they ultimately chose."

Being close family and friends as well as to areas where they could shop and to health care facilities were called important by both older boomers and the silent generation.

Among those who responded to the survey and had sold a home, the most common reason was a desire to move closer to family and friends, closely followed by the home being too small. A change in family situation was also frequently cited.

The largest share of all home sellers, 43 percent, were baby boomers. Those aged 55 and younger often upgraded to a larger and more expensive home while staying relatively close to their prior home. Sellers 56-years and older regularly purchased a similarly-sized home, but less expensive than the home they sold by moving farther away.

Sellers had lived in their previous home for a median of 10 years before selling, although those aged 31 to 40 had a median tenure of 6 years and for those 66 and older it was 15 years. Recently sold homes were generally on the market for a median of three weeks and sellers withdrew a median of $66,000 in equity through the sale.

During the pandemic, the usefulness of virtual tours skyrocketed, especially among 22- to 40-year-old buyers. "Homebuying aside, this segment of the population was already accustomed to doing research online," said Lautz. "So, to see them really embrace virtual tours and virtual open houses was a given, nonetheless, real estate agents are the top information source, and the data shows these buyers ultimately used agents to purchase a home."

Eighty-eight percent of all buyers, and a slightly higher share younger ones, said they had used an agent during their home search. Nine out of ten sellers did the same in marketing their homes.

NAR mailed questionnaires last year to 132,500 recent homebuyers. Respondents had to have purchased a home as a primary residence between July 2019 and June 2020. All information is characteristic of the 12-month period ending July 2020 apart from income data, which are for 2019.