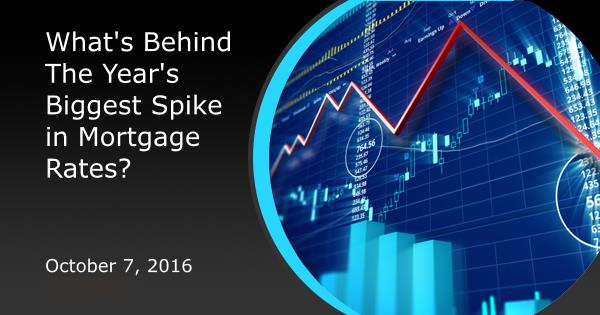 What's Behind The Year's Biggest Spike in Mortgage Rates?

The term "taper tantrum" refers to the market movements that took place in mid-2013 as the Federal Reserve increasingly confirmed it would begin reducing the amount of bonds it was buying under its quantitative easing ("QE") program.  Because QE targeted Treasuries and mortgage-backed-securities, it had a profound effect on mortgage rates, bringing them to all-time lows in the fall of 2012.

May and June of 2013 were the worst two months in modern economic history for mortgage rates in terms of the pace of movement.  Ironically, it wasn't until the European Central Bank (ECB) began work on its own QE plan in April 2014 that rates finally began to make a meaningful recovery.

The connection between European policy and US interest rates may seem counterintuitive, but there is a strong correlation between the government bonds of the world's biggest economies.  If there was to be a huge, guaranteed source of demand for European bonds, then US bonds would experience some of the benefit.

The remainder of 2014 consequently saw rates move progressively lower in anticipation of European QE.  By the time ECB QE was officially approved in early 2015, rates were once again approaching all-time lows.  The rest of 2015 would serve as the market's opportunity to catch its breath before continuing the trend in 2016.

The case of QE in the US taught us that rates could continue falling as long as central bank bond-buying was either steady or potentially expanding.  As soon as the Fed indicated QE was "steady or potentially contracting," it marked a sea-change for the rate environment.

Investors are now anxiously awaiting a similar big-picture shift in European bond-buying.  Even though European officials have denied having those conversations, an article from earlier this week cited anonymous officials as saying there was consensus on the need to consider reducing the pace of bond-buying.

Whether or not the sources were accurate, the proverbial can of worms has been opened.  Markets are ready to pounce on even the smallest hint of confirmation out of Europe.  To that end, the European Central Bank announcement on October 20th could be a focal point for volatility.

Between now and then, the mood is definitely defensive.  Even after the big jobs report came in weaker than expected this week, rates refused to come down from the highest levels in more than 3 months.  If we look at 10yr Treasury yields (the best proxy for general momentum in longer-term rates like mortgages), we can see a new trend taking shape, and potentially breaking an important ceiling (roughly 1.73%). 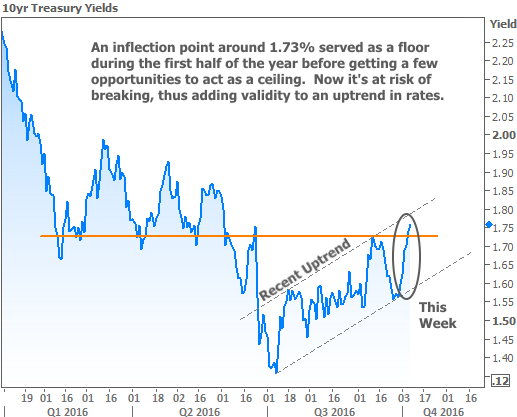 Despite the doom and gloom, perspective is easy to find in the bigger picture.  After all, during almost any other time in history, today's mortgage rates would be all-time lows.  It's only in relation to the "low 3's" in July that today's "mid 3's" seem anything other than stellar.

It's also worth keeping in mind that financial markets will never move in a straight line.  Some say the lowest rates are behind us, but that's a premature conclusion as long as we continue to operate in the broader downtrend seen in the following chart.  That said, even if rates go on to make new all-time lows in the future, periodic corrections toward higher rates are inevitable.  The severity and duration of such corrections are the only uncertainties. 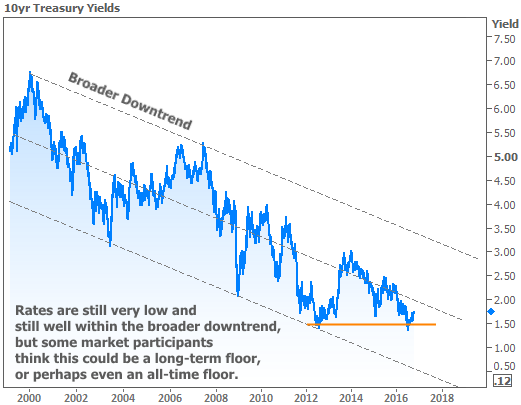