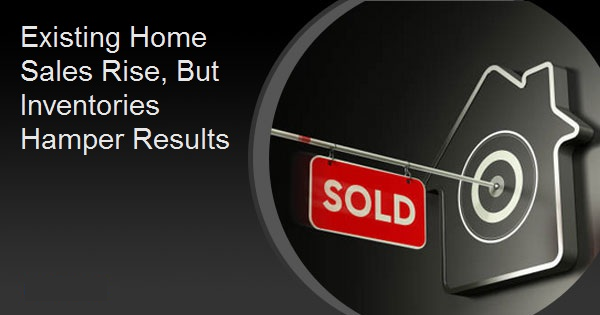 Existing home sales started the 2021 with a small increase from the December sale levels, the second consecutive monthly gain. The National Association of Realtors® (NAR) said transactions that include pre-owned single-family homes, townhomes, condominiums, and co-ops, increased 0.6 percent in January to a seasonally adjusted annual rate of 6.69 million units compared to 6.76 million in December. The month's results are up 23.7 percent from the annual rate of 5.41 million sales in January 2020.

Existing home sales have increased in seven of the last eight months, even though pending sales, generally considered a leading indicator for the following one or two existing sales reports, have posted four straight monthly losses.

Analysts surveyed by Econoday had expected a slight pull-back in January's sales. Their consensus was for annualized sales of 6.60 million units.

Sales of single-family homes were at a seasonally adjusted annual rate of 5.93 million, a 0.2 percent gain from 5.92 million the previous month and a 23.0 percent year-over-year increase. Condominium and co-op sales rose 4.1 percent from December to a rate of 760,000 units, 28.8 percent annual growth.

"Home sales continue to ascend in the first month of the year, as buyers quickly snatched up virtually every new listing coming on the market," said Lawrence Yun, NAR's chief economist. "Sales easily could have been even 20 percent higher if there had been more inventory and more choices."

Whereas much of the economy has suffered due to COVID-19, the housing sector has been one of the few bright spots, according to Yun. "Home sales are continuing to play a part in propping up the economy," he said. "With additional stimulus likely to pass and several vaccines now available, the housing outlook looks solid for this year."

Yun says he expects more jobs to return, which will spur homebuying in the coming months and predicts existing-home sales will reach at least 6.5 million in 2021. This will be despite an increase in mortgage interest rates due to the rising budget deficit and higher inflation.

25.7 percent from the 1.40 million listings in January 2020. The unsold inventory is estimated to be a 1.9-month supply at the current sales pace, unchanged from December, but down from the 3.1-month supply a year earlier. Properties typically remained on the market for 21 days, seasonally even with December, but down from an estimated 43 days in January 2020. Seventy-one percent of the homes sold in January 2021 were on the market for less than a month.

Sales results for January were mixed across the four major regions, but all posted double-digit increases in both annual sales and appreciation. Existing-home sales fell 2.2 percent in the Northeast to an annual rate of 870,000 units, 24.3 more than a year ago. The median price rose 15.8 percent to $361,400.