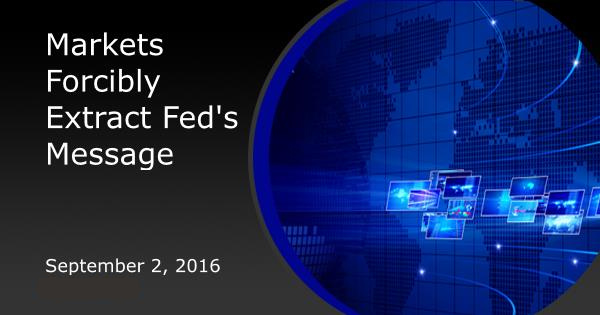 When it comes to the Fed providing solid clues about the next potential rate hike, financial markets are out of patience.  Rates may be ready to make their next move with or without the Fed's blessing.

Over the past few weeks, we've increasingly witnessed a consolidation in bond markets.  (That's a fancy way of saying interest rates have been less and less volatile.)  When we look at this on a chart, and if we draw lines resting along the highest and lowest interest rates, the lines converge on a single point.  More often than not, rates will break forcefully higher or lower before reaching that point.

If the analogy works for you, think of this like squeezing a spring between your thumb and forefinger.  The space occupied by the spring gets smaller and smaller until one side slips.  The spring could launch in either direction.

As of last week's Jackson Hole Symposium (where the Fed often shares some more candid thoughts about monetary policy), interest rates could scarcely have been compressed any further.  When Fed Chair Yellen's speech came out, rates moved lower at first, but shortly thereafter, Fed Vice Chair Fischer framed Yellen's speech in a different context.  In not so many words, he said "hey everyone!  Yellen just said we're going to hike rates in 2016!"  And rates moved quickly higher in response. 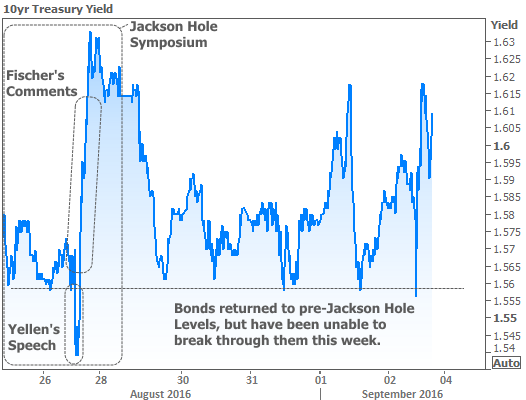 As you can see in the chart of 10yr Treasury yields (a good proxy for general movement in longer-term interest rates, like mortgages), rates managed to bounce back early this week.  Incidentally, it was additional comments from Fischer that helped everyone calm down.  The end of any given month also tends to be more rate-friendly, because certain investors are required to hold a certain amount of bonds for their official month-end reporting (higher demand for bonds equates to lower interest rates).

As September began, rates moved higher immediately only to be sent tumbling back to the previous floor by exceptionally weak economic data on Thursday (ISM Manufacturing).  Then on Friday, the big jobs report came in below its forecast--something that would normally help rates move lower, or at least hold their ground.  Instead, rates began rising back toward recent highs, suggesting that markets may be have simply decided "it's time" to break out of the consolidation pattern, regardless of the quality of the evidence. 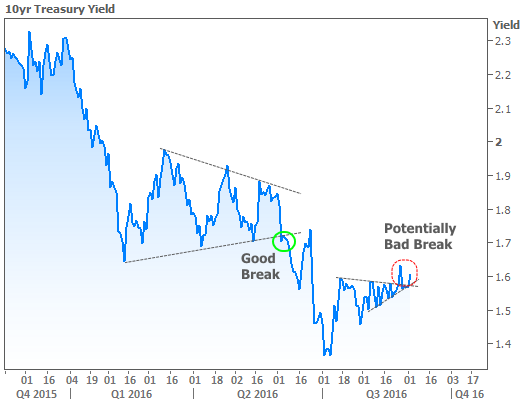 Indeed, this has the potential to be the first sign of a bad break for rates, but there is at least one caveat.  Financial markets tend to shed risk heading into weekends.  This is doubly true for US markets heading into a 3-day weekend where the rest of the world will be trading on Monday.  Shedding risk, in some cases, can mean that traders are selling bonds, thus causing rates to rise slightly more than they otherwise might be.

The other caveat is that markets themselves aren't particularly sold on the increased chances of a Fed rate hike.  If we look at Fed Funds Futures (which measure the likelihood of a hike by a certain month--in this case, December), we can see that by the end of this week, odds of a hike moved back to pre-Jackson Hole levels. 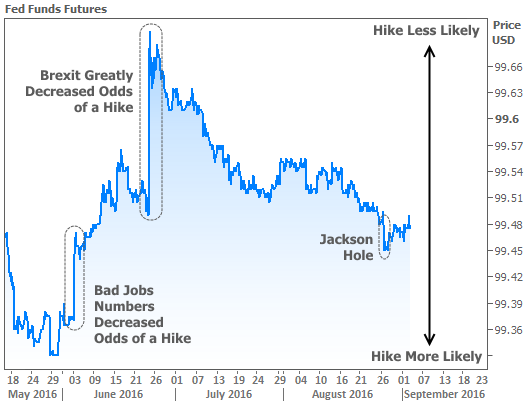 The comparatively bigger swings seen in June make the recent movement seem much more arbitrary (i.e. rates have been more volatile than the Fed rate hike outlook would suggest).  This fits perfectly in line with the concept of markets simply having run out of patience for the increasingly narrow range of rates.  Long story short: if you forced financial markets to pick the next move in rates, they'd probably choose "higher," but there is at least some hope that the answer will change when they get back in the office after the 3-day weekend.

Does all this Fed-related interest rate drama matter for the housing market?  Absolutely!  At first glance, it might not seem like housing would respond too much to interest rate volatility, but in the bigger picture, the correlations are undeniable.  Not only are rates, themselves, a factor, but market psychology can also have a bearing on the strength of the housing market.  Incidentally, a longer term chart of the Pending Home Sales data that came out this week helps illustrate the point. 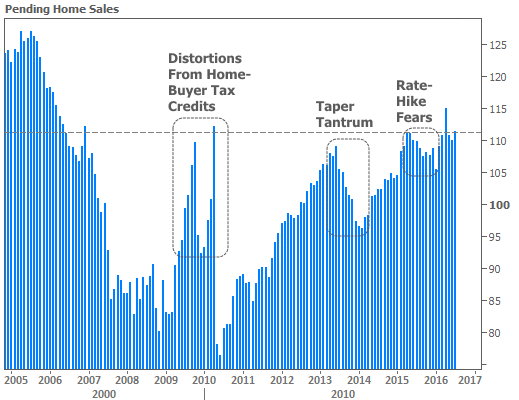 Apart from the homebuyer tax credit distortions in the immediate wake of the financial crisis, the most notable changes in the Pending Home Sales Index have followed the major Fed policy developments.  In 2013, the Taper Tantrum clearly took a bite out of sales, and then the Fed's rate hike rhetoric in 2015 aligned with the next salient decrease in activity.